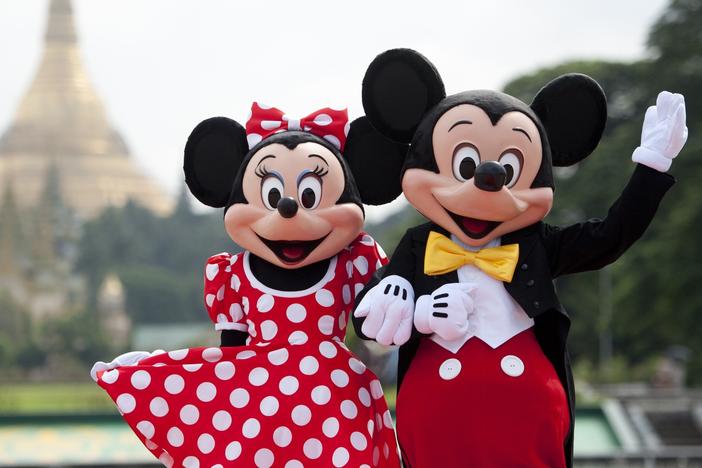 Hi. My name is Aisha and I’m a Disney adult.

But I’m not like those other Disney adults – I’m a cool Disney Adult.

I certainly never threw a wedding where I asked my guests to find their own way to eat during the reception, as my partner and I chose to spend the thousands of dollars our parents had budgeted for catering during Mickey and Minnie Mouse appearances. Could never be me.

(My partner did propose to me while we were at Disney World celebrating my 30th birthday. It’s cool, though.)

I have absolutely no interest in living in a residential community owned by Disney and staffed by Disney cast members – how cool blurred area could the hell it turn out to be?

(Still, I do have Disney playlists in my regular rotation to work on background music, and yes, I know all the lyrics to “Thomas O’Malley Cat” from The Aristocats. I’m still cool, though.)

I would never call my partner my “Disney Prince” – yech!

(But we do watching old and new Disney movies together, and having seen Aladdin, Frozenand The Lion King on Broadway. In case you were wondering, we don’t have kids and we absolutely don’t want any. We’re still cool, though.)

Fandom is a weird thing. It’s a state of being where at least a bit of fantasy inherently comes into play, regardless of medium, and the internet, with its memes, Tumblr pages, and interest groups, has only made that more obvious while giving us a myriad of new ways to show he’s a fan. It’s also interesting to witness the ever-changing hierarchies of fandom within the cultural zeitgeist, and what’s considered cool to be obsessed with and what isn’t. Comic book nerds, for example, once a niche population and the butt of jokes, have more or less swallowed mainstream popular culture at large, thanks to the Marvelization of…well, everything.

Last week it was pointed out that not all fandoms are treated equally, thanks to a viral Reddit post “Am I the asshole” which may or may not be a true story. In case you’re unfamiliar with “AITA,” as it’s called, it’s the judgy gift that keeps on giving, a popular Reddit subreddit where users post their personal riddles and then ask the rest of the world to decide if they were wrong or right. This particularly chaotic post about the couple choosing Mickey and Minnie over feeding their guests has understandably sparked the most devious wave of derision on the fandom known as “Disney Adults.” Tweets like “We need to study the disney adult spirit like we do for serial killers” and “I said it once, I’ll say it now, and I’ll say it 100 more times. Disney adults are the worst people.”

To make matters worse, the well-meaning religious studies professor stepped in to defend my ilk with a wire it basically boiled down to “Don’t pathologize these people; to them it’s like religion, except instead of worshiping hypothetical gods, they’re worshiping a moral person!” Twitter kicked into high gear, swarming and devouring this professor’s infantilizing feed as if it were the hyenas descending on Scar. The answers were golden.

I don’t care if people make fun of Disney adults. Many jokes are actually quite funny. It’s a weird and original thing to review the Lady and the Tramp once in a while once you are over the age of, say, 12! I own this.

On the other hand, I find the intense vitriol – not the jokes, but the suggestions that it amounts to religion or a cult – to be more than a little confusing. From where I stand, Disney adults don’t seem like the kind of fandom that cares much about what other people think of us or the things we like. I don’t see them launching massive doxing campaigns against anyone who dares to speak ill of Encanto, like fans of certain pop stars or superhero movies. Maybe it’s because I’m a cool Disney adult and don’t run around in these circles? I do not know.

Part of that seems to stem from an understandable disdain for Disney as a corporate monopoly, and all the negatives that come with it. (On the one hand: the company’s position as financially beholden to political groups that actively attempt to strip basic human rights.) I agree with these criticisms; no brand should have all that power.

Probably the most important element, however, is Disney’s “wholesome” and kid-friendly image, which has been meticulously ingrained in the public imagination since the brand’s inception. Despite owning everything under the sun, star wars from Marvel to the Muppets to Pixar, the Disney brand remains in people’s minds like nothing more than this iconographic image of Tinker Bell tapping Cinderella’s castle with her wand. To say something has been “Disneyfied” is a dismissive shorthand for watered down, chaste, safe, conservative. The company does a lot to project that fluffy image (ahem, that much-hyped “gay-only” moment that turned out to be just seconds of two guys dancing together), so I get it. I can see how it feels like the equivalent of continuing to enjoy Blue’s clues even after reaching 5th grade – to love a product ostensibly aimed at children is to somehow exist in a state of arrested development and disconnected from reality, the thinking goes.

To which I reply: All fiction forces the viewer to disconnect from reality! That’s the point! Also, have you seen Pinocchio recently? This whole Pleasure Island sequence is like a PG-rated precursor to Fritz the cat!

Even the term “Disney Adult” suggests it’s an oxymoron, an incongruous identity – we don’t call people Muppet Grown-Ups or Mature star wars fans, although these fantastic franchises also appeal to people of all ages. Sigh.

It all boils down to this: the Disney products we associate with princesses and talking animal companions and musicals will never be “cool,” even though they’ve become the model for cultural commodification in nearly every corner of the world. western culture for nearly a year. century. And it’s good ! On the social scale of pop culture fandom, the adults of Disney are the children of the theater. (Yes, in case you were wondering, I was a theater kid too. A cool kid, though.) We’re passionate — some a little too much — and tend to sing along at unexpected times. We like to rank up villains and princes, and drop way too much cash for the chance to ride Space Mountain. We are an acquired taste. Like all other cults, fandom.

This essay first appeared in NPR’s Pop Culture Happy Hour newsletter. Register to receive the newsletter so you don’t miss the next one and receive weekly recommendations on what makes us happy.