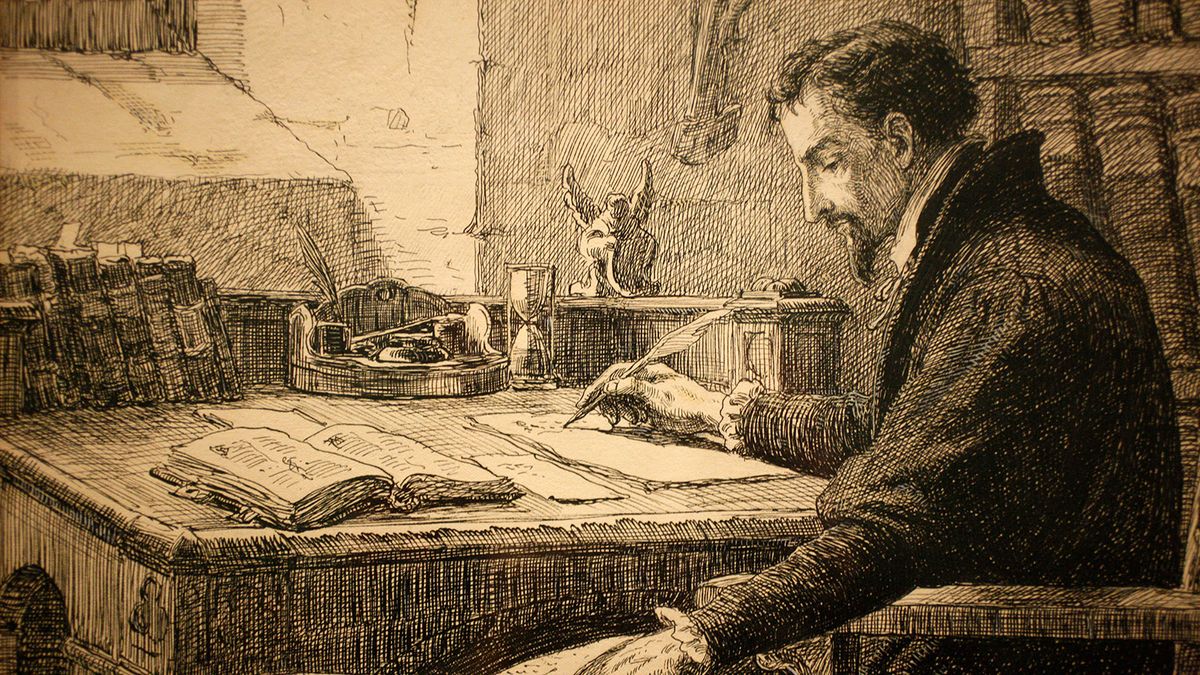 In 1536, 27-year-old John Calvin (better known as John Calvin) fled his native France, where he had been persecuted for his new Protestant faith, and wrote a groundbreaking theological treatise titled “Institutes of the Christian Religion “.

A wanted man in Catholic France, Calvin took refuge in neighboring Switzerland and stopped at an inn in Geneva where he only planned to spend one night. But when the head of the local church, William Farel, learned that the author of “Institutes” was there, he burst into the inn and told Calvin it was God’s will that he stay and preach. in Geneva.

When Calvin tried to explain that he was a scholar, not a preacher, Farel turned red in the face (not harsh for a redhead) and swore that God would curse Calvin’s so-called “studies” if he dared leave Geneva. A man of great faith, Calvin took this as a sign.

“I felt as if God in heaven had laid his mighty hand on me to stop me in my tracks”, Calvin later wrote, “and I was so terrified that I did not continue my journey.”

John Calvin spent the rest of his life in Geneva preaching a new strain of Protestantism known as Reformed theology. A contemporary of famous Reformation leader Martin Luther, Calvin was the father of Calvinism, a faith inextricably linked to the controversial doctrine of predestination, according to which a sovereign God has already chosen who will be saved and who will be damned.

To better understand the life and legacy of Calvin – one of Christianity’s most influential and controversial figures – we spoke with Bruce Gordon, professor of church history at Yale Divinity School and author of the biography “Calvin” and “John Calvin’s Institutes of the Christian Religion: A Biography.”

“God willing, it must be good”

In his early twenties, Calvin was studying law in France (his father’s idea) when he came across the preaching of Luther, who taught that God was found in the Bible, not in the saints and sacraments of the Roman Catholic Church. Much like his later experience in the Geneva Inn, Calvin was convinced that it was God’s will that he leave law school and follow in the footsteps of Luther and other early church reformers.

The will of God – or more accurately the “sovereignty” of God’s will – is a central tenet of Calvinism, the Protestant movement founded in Calvin’s name. For Calvin as well as for most early Reformers, the Bible made it clear that God was an all-powerful being who controlled everything, including the salvation of mankind.

“One of Calvin’s main themes was that we don’t know the mind of God,” says Gordon. “But if God wants it, it has to be good.”

If God alone is responsible, then there is nothing we sinful humans can do to “earn” our salvation. Yes, we can be “justified” by faith in Jesus Christ, as Luther taught, but even that faith in Christ is not the product of our will. It is a gift from God prepared since the dawn of time.

Born nearly 30 years after Luther, Calvin was a “second generation” Protestant reformer, says Gordon, meaning he inherited much of his theology from those who came before him, including the influential Swiss theologian. Huldrych Zwingli, whose book Gordon has just published. about (“Zwingli: the prophet armed with God”).

One such widely accepted doctrine in the Reformation era was predestination.

“Calvin is famously associated with predestination, but what many people don’t know is that predestination was a core teaching of Christianity from early church fathers like St. Augustine,” Gordon says.

The accepted version of predestination was that God had “chosen” those who would be saved from before the creation of the world. But Calvin went one step further and took predestination to its next logical conclusion: if God alone decided who was saved and would dwell with him in heaven, then he also decided who was damned and would spend an eternity in hell. And here’s the kicker: there’s nothing we can do to change that.

In theological terms, Calvin’s belief in a sovereign God who both saves and damns according to his own will is called “double predestination”, and it was controversial from the start.

“The idea of ​​double predestination shocks a lot of people, because they start saying, Calvin created this God who is the source of evil,” Gordon says.

Keep in mind that Calvin was preaching in the 16th century, when the belief in a literal heaven and hell was universal. In this context, double predestination seems to raise a poignant question: if God has already decided who goes where, then how do I know if I am one of the lucky ones?

“Interestingly, Calvin was pretty optimistic about it,” Gordon says. “Calvin taught that if you are troubled by this question and try to find signs of your election, that in itself is a sign that you are numbered among the elect. fuck.”

Calvin came to believe that election could be “proven” by outward signs, including: the profession of faith, disciplined Christian behavior, and conscientious attendance at the Lord’s Supper (or Communion), the only sacrament inherited from Catholicism .

Much like predestination, no discussion of John Calvin can omit an infamous incident that took place in 1553, when Calvin was the chief religious authority in Geneva, known as the “Servet Affair”.

Michael Servetus (Miguel Serveto) was a very literal Spanish “Renaissance man”. He was a self-taught scholar of the Bible, cartography, human physiology and more. Servetus got into hot water with Catholic authorities when he published tracts rejecting the Trinity, the doctrine that God the Father, God the Son (Jesus Christ), and God the Holy Spirit were three persons. distinct united in one Divinity. For his crime of heresy, Servetus was sentenced to death by the Catholic Church.

But Servetus escaped from prison and fled to Geneva, where he appeared publicly at one of Calvin’s sermons and was summarily arrested. Calvin and Servetus had a history. They had exchanged letters for years, each trying to convince the other of their theological follies, and Calvin had even visited Servetus in Paris – at great risk to his own safety – to urge the heretic Servetus to repent.

Ultimately, Servetus was executed in Geneva for his heretical teachings. Calvin’s defenders argue that he had no power to save or condemn Servetus, and that it was the state that killed him. Critics of Calvin insist that a man in Calvin’s religious authority in Geneva could have intervened to save Servet’s life. Instead, he burned at the stake.

Gordon says the Servetus affair made Calvin look like a hardliner and provided ammunition for critics and opponents of Calvin, many of whom he had in the 1550s.

“This story makes Calvin infamous among many people as that ‘lightning-throwing Zeus’ who created a punitive and judging God in his own image,” says Gordon. “Calvin becomes associated with this very severe notion of God.”

Calvinism and the Protestant work ethic

In Geneva, Calvin helped create a theocratic society in which the Bible was the primary guide to moral and civic order. Ordained pastors, elders, and deacons oversaw the spiritual and temporal welfare of the city, ministering to the poor and rebuking the wicked. Sunday church attendance was compulsory. Lectures, sermons, and church services were held every day of the week, with Calvin himself preaching and teaching publicly every day. He maintained this tireless pace until his death in 1564.

In the following century, Calvinism arrived in England, where it was adopted by the Puritan movement. Not all Puritans who came to America were Calvinists, but sociologist Max Weber credits Calvinist theology with fueling the rise of capitalism in the colonies.

The Puritans, unlike Calvin himself, were consumed with anguish by the question of their predestined status: were they among the chosen or the damned? Puritans came to believe that an outward sign of election was economic prosperity. This Puritan doctrine fostered the development of what Weber called the “Protestant work ethic”, in which individuals accomplish God’s will through worldly vocations.

In the 18th century, Gordon says, Calvinism went into decline as Enlightenment ideals of personal freedom crumbled against the rigidity of predestination. In its place came a more liberal streak of Protestantism, which moved away from strict predestination to embrace the more inclusive concept of “universality”, in which all mankind can be saved through faith in Jesus. -Christ.

But that doesn’t mean Calvinism is dead. Far from there. Calvinism made a comeback in the resurgence of Reformed theology and the popularity of Reformed churches and pastors like John Piper and Timothy Keller. As chronicled in the book “Young, Restless, Reformed: A Journalist’s Journey with the New Calvinists”, Calvin’s uncompromising teachings, including predestination, have made their way to a new generation of young evangelical Christians.

HowStuffWorks earns a small affiliate commission when you purchase through links on our site.

Create a culture and a religious faith