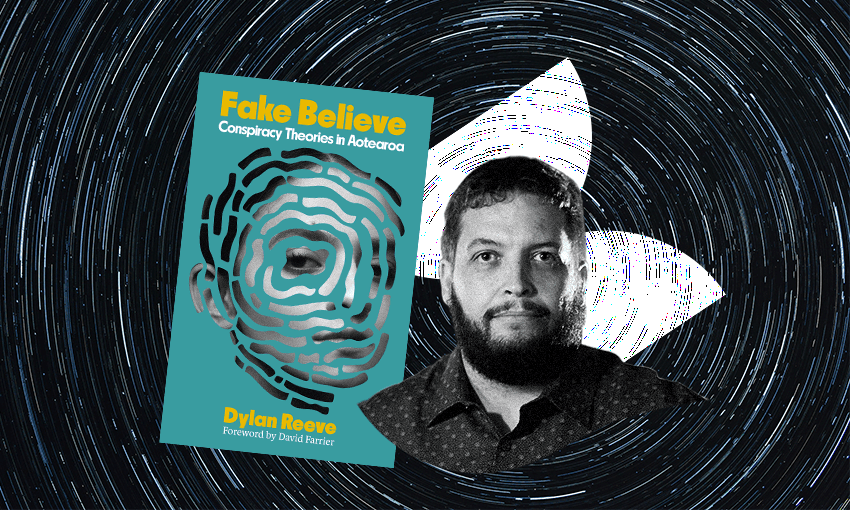 What makes a conspiracy theorist?

In this excerpt from Dylan Reeve Fake Believe: Conspiracy Theories in Aotearoa, the author grapples with the questions of why some people come up with conspiracy theories – and why some believe them.

How do people come to believe these things?

A common assumption is that people who embrace conspiracy theories are, for lack of a better word, stupid.

“How can people be so stupid? observers ask when they see the outlines of a conspiratorial belief. “You’d have to be an idiot to believe that!”

But what has always struck me about this idea is that the many believers I have spoken to are decidedly not stupid. Many are highly intelligent, some with strong academic backgrounds. They are often people who consider themselves, not without reason, to be deep thinkers and naturally inquisitive.

In many ways, they often remind me a lot of myself (I’m definitely not an academic, but I spend a lot of time learning and thinking). It’s amazing how often I find that we have similar experiences, ideas and journeys.

Of course, this is not universally true – like any aspect of society, the broad communities that engage in these conspiratorial beliefs defy simple classification entirely.

However, it is important, I think, to recognize that, at a fundamental level, most people who honestly engage with these ideas are not far removed from us. Indeed, the the cognitive quirks that draw people to conspiracy theories are things we all fall victim to from time to time.

Like me, many other people I’ve talked to who study and observe these groups and these ideas often find themselves thinking something like, “There, but for the grace of God, I’m going.

The subject of why people come to believe these things is certainly not a topic that lacks academic study, and there is no doubt that the explosion of conspiratorial narratives in recent years will lead to a similar explosion in study. further. But there is still much disagreement among scholars about the drivers of conspiratorial belief, and even where the findings are widely accepted, they tell us little on an individual level.

A 2019 meta-study by Andreas Goreis and Martin Voracek that reviewed 13 previous studies on the psychology of conspiracy theory, for example, draws a number of plausible and justifiable conclusions.

Their study, presented in the journal article ‘A systematic review and meta-analysis of psychological research on conspiratorial beliefs: field characteristics, measures and associations with personality traits’, found for example that the fear and anxiety, as well as paranormal belief, are potential predictors of susceptibility to conspiracy belief. But the study points out that psychological factors are not necessarily the only consideration. A number of studies reviewed by Goreis and Voracek seek to find links with sociopolitical factors, and in that direction they see many links to things like perceived helplessness, negative attitudes towards authority and even religious beliefs.

Ultimately, after reviewing the psychological literature on the matter, we could arguably come up with an assessment suggesting that people who are anxious, distrustful of authority, and willing to believe in ghosts, are more at risk of accepting ideologies based on the conspiracy.

But that certainly doesn’t mean that anyone matches that description is suddenly on the verge of believing that a global child trafficking ring is operating in the basement of a Washington DC pizzeria.

In fact, if we’re honest about it, we’d probably agree that many of us might fit the potential psychological profile of someone who might hold conspiracy beliefs.

If we honestly assessed any given individual – our cousin who keeps warning us about the Covid vaccine, perhaps – against the many contributing factors cited in the vast body of literature, we would certainly find many results. But, in the same way, if we would indulge in deep introspection, we would surely find many correlations within ourselves as well.

It’s a bit like reading a horoscope after the period it claims to predict – there are always many correlations to be found in retrospect.

I don’t think psychology can tell us who, in a specific way, will find their way to these beliefs or even precisely why. But it sheds light on the general ideas and factors that make these theories and stories appealing to people as a larger group.

I often think of the motivations of conspiracy theorists. Many, perhaps even the majority, are good people in the sense that they believe that the things they fight against and the ideas they spread help people or benefit society. They are – rightly, they believe – convinced that their fellow human beings are in danger; that there is a vast and covert effort to harm them.

In their online forums they talk about saving people and “waking people up” to the evil that threatens them. They express their despair and anguish over what they believe to be attacks on the people around them. They swear to act and be accountable to those responsible for the harm they see.

They are, fundamentally, motivated by attention and concern.

But this care and concern sees them hurting themselves. They spread misinformation that can lead people to make decisions against their own interests. They amplify and promote ideas that may provide the justification some individuals feel they need to threaten, attack, or even kill people.

A prominent New Zealand conspiracy theorist – still subject to suppression orders by the courts as I write this – is even accused of allegedly carrying out literal sabotage against infrastructure in service of his conspiracy beliefs.

There are also many who weaponize these generally good instincts in others to manipulate them for their own ends. They craft conspiracy narratives and exploit fears and suspicions to radicalize unsuspecting people in ways they might not perceive.

There are sometimes openly bad actors who seek to sow ideas in a community always ready to believe. These are people who will deliberately create content that they intend to become a fully formed conspiracy theory.

In some cases, these provocateurs are motivated by a desire to spread their harmful ideologies or undermine the people and ideas they oppose. In other cases, they may just be there for “the LOLs” as they might put it – to have their false claims accepted as suppressed truth is something of a victory.

The origins and influences of any given conspiracy theory quickly become murky as it is subsumed into a culture that adopts and embellishes it to fit a new idea to existing assumptions, concerns, and suspicions. Everything about the environment in which conspiracy theories develop is designed to change, develop and transform them according to the current moment or the specific geopolitical situation.

A conspiracy theory quickly becomes like a massive version of Chinese whispers, in which each step it takes adds a new element or twist.

As a rule, ideas are transmitted, effectively, from one person to the next, each reporting and adding their own twist. On the many alternative conspiracy news sites, this manifests itself in original articles that use other sites as sources, which in turn use other sites as sources. In conspiracy-centric social media channels, it’s usually various influencers and aspiring influencers reposting content from more well-known channels, while adding their own interpretation and speculation on top of that.

As such, it is generally impossible to meaningfully determine whether an allegation was planted with specifically malicious anti-Semitic intent, for example, or whether it just became that due to the ubiquity of existing conspiracy narratives that ultimately see Jewish control at the root of events.

So, in the end, we find well-meaning people alongside people motivated by existing hateful ideas, repeating all the same demands. Even they can’t necessarily identify. As I turn this problem around in my head, I feel, in some ways, a bit like religion.

The majority of religious people are, I suspect, driven largely by good intentions and concern for those around them. They often believe that our mortal souls are in danger and that we are threatened by evil powers that seek to harm humanity.

These beliefs can cause well-meaning people to do and say things that cause real harm. And some aspects of these religious ideas even end up being a kind of justification for people who threaten, attack and even kill others.

Moreover, there are religious extremists who exploit these beliefs and concerns in order to convince people that they must take certain actions or make certain decisions that could harm them or others.

Fake Believe: Conspiracy Theories in Aotearoa by Dylan Reeve (Upstart Press, $39.99) can be ordered from Unity Books Auckland and Wellington.