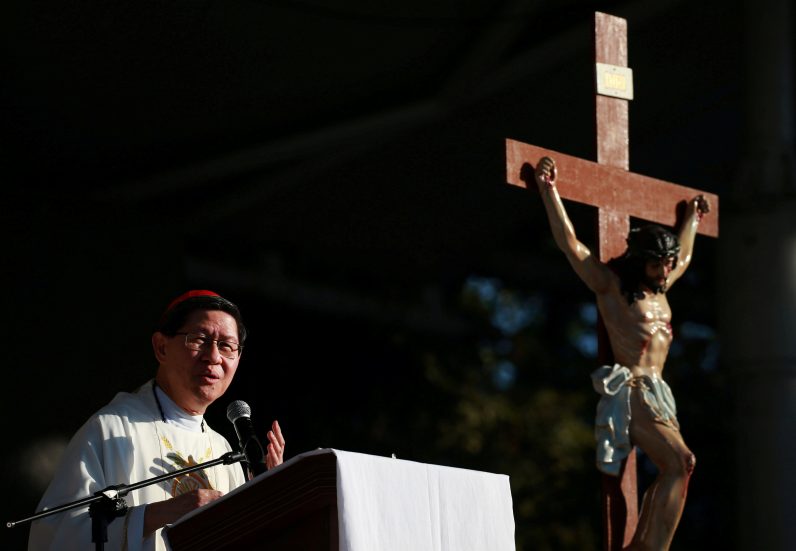 DUBLIN (CNS) – Cardinal Luis Antonio Tagle, head of the Vatican evangelistic congregation, has expressed concern over the â€œhijackingâ€ of religion by populist leaders who sow division and exploit the anger of those who feel excluded.

Speaking after delivering the TrÃ³caire / St. On March 9, Patrick’s College Maynooth Annual Lenten Lecture on â€œCaring for the Human Family and Our Common Home,â€ the Filipino prelate warned: â€œThere is a growing sense of division in the world today, and unfortunately religion is used to aggravate the division; sometimes even within the same religious affiliation you have divisions.

Referring to the recent rise of populist leaders, Cardinal Tagle described the phenomenon as “the return of the mighty type of big bosses”, some of whom “are hijacking religion”.

These so-called populist leaders know where the pockets of disgruntled people lie and present themselves as messiahs, he said. They use religion as a “convenient way” to get followers, he added.

The president of Caritas Internationalis noted that in the encyclical â€œFratelli Tuttiâ€, Pope Francis devoted several paragraphs to the issue of populist leaders who claim to defend the people, when in fact they are defending a certain group.

Speaking via Zoom from Rome, the cardinal stressed: â€œWe need to carefully study why these leaders have followers; why are they becoming popular? “

He suggested that the pandemic could worsen the exclusion of people such as the poor and migrants, and that is why Caritas Internationalis had released two documents calling for better access to COVID-19 vaccines for countries in the South.

â€œI hope this pandemic teaches us that we are truly connected to each other and to the earth, and that what happens in one part of the world can have a universal impact. I hope we will grow in responsibility towards others, â€he said.

A close collaborator of Pope Francis, Cardinal Tagle said that while the pandemic may restrict some exercises of faith, it could also “lead to pastoral creativity, especially within families.”

Speaking to Catholic News Service, the Philippine prelate admitted that the pandemic had brought “a lot of suffering”.

The Prefect of the Congregation for the Evangelization of Peoples admitted: â€œfor us in the Church, part of the suffering is that we want to provide pastoral help and guidance, but we cannot do it as we have. the habit.

However, he put the pandemic restrictions on worship in the context of the suffering of Christians banned from practicing their faith. He said he was inspired by the “hidden Christians” of Japan.

â€œAmidst the restrictions, it was families, lay people, especially mothers and grandmothers, who passed on the faith. They were creative, â€the cardinal said.

Acknowledging that the pandemic had disrupted parish life and the church’s usual way of providing services and catechetical training due to the restriction of movement, he said it provided an opportunity to identify aspects of the Christian life and church life to which â€œwe have not paid enough attentionâ€, including â€œthe role of the family in the transmission of the faith and the formation of families in the social teachings of the Churchâ€.

â€œIn the past, the transmission of the faith, the teaching of prayers and catechism were done in homes. It was the parents or the grandparents who did it. But with the development of specialized ministries such as religious education and catechists, this had diminished.

â€œWith the lockdown, children couldn’t be brought to Sunday school, and catechists and teachers couldn’t do their usual jobs. Are parents equipped to train their families, children, grandchildren, and each other in faith and mission? ” He asked.

â€œI think the pandemic has opened up possibilities for us, but it has also become a mirror showing us where we have been weak in terms of Christian training. “

â€œThis pandemic has led many churches and dioceses to reassess our usual ways of carrying out mission and pastoral commitment. Even here in the Vatican, we are invited to reflect on what we call â€œnormalâ€ customary ways, to see how we can respond more adequately to the evolving situation. The mission doesn’t stop, he said, and the question is, “How do you do it in a changed situation?” “

Cardinal Tagle said his TrÃ³caire Lent reflection was an attempt to bring together the themes of Pope Francis’ encyclicals, â€œLaudato Siâ€, on the protection of our common home, â€andâ€œ Fratelli Tutti â€, the call to universal social friendship.

He stressed that many economic or political choices today are detrimental to the survival of the earth. â€œIrresponsible use of creation now not only prevents the passing on of a liveable and habitable world to future generations, but it also violates a key element of the church’s social teaching, namely that the goods of the earth are for all and should be shared by all. “