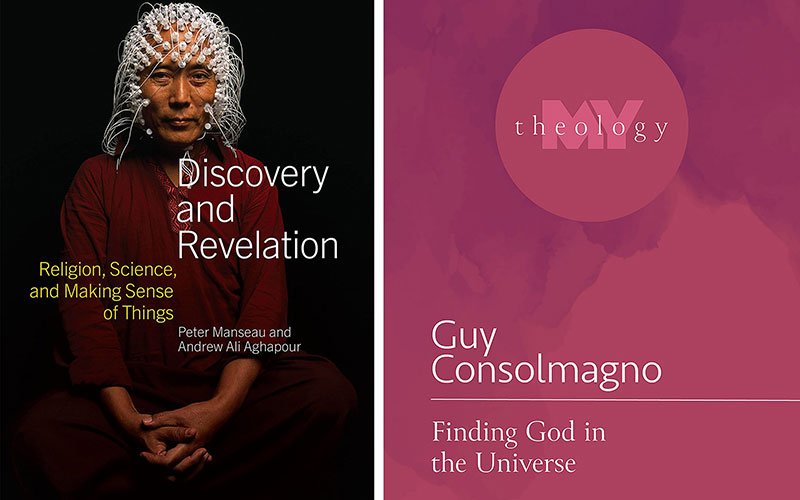 By Christy C. Dellinger On Jul 17, 2022
Share
These are the book covers of “Discovery and Revelation: Religion, Science and Making Sense of Things” by Peter Manseau and Andrew Ali Aghapour; and “Finding God in the Universe” by Guy Consolmagno. The books are edited by Timothy Walch. (CNS photo courtesy Smithsonian Books and Fortress Books)

Conventional wisdom suggests that science and religion are at odds – facts versus faith. Both of these books, however, make a compelling case for “relational unity” between powerful realms of human thought.

In this effort, the authors draw on the spirit of Saint John Paul II as expressed in a speech at the Vatican Observatory in 1987. In these remarks, the pope called on theologians and scientists to find harmony between science and religion. “We are moving towards unity”, he stressed, “as we move towards meaning in our lives”.

The Pope’s challenge was daunting, but these slim volumes offer important insights for our consideration. Neither book provides a blueprint for how science and faith fit together, but both books help us ask better questions.

“Discovery and Revelation” is an extension of a Smithsonian exhibit of the same name. It is a book of both text and illustrations “that examines the mutual influence of two ways of knowing that continue to shape the American experience.”

The book and the exhibition address fundamental questions. “Both science and religion are well equipped to offer possible answers to humanity’s ultimate existential questions,” the authors note. “What does it mean to be human? What is unique about our species and our consciousness? What are our bodies made of? Where did we come from?”

The authors highlight how faith and science have worked together at important times in history. The first theme is “revolutions” and concentrates the ideas of the Enlightenment in the 18th century. The second theme is “evolution” and focuses on the clash between scientific and religious thought in the 19th century. The third theme is “complexity” and assesses the interaction between religion and science in the 20th century.

In the process of developing these themes, the authors present not only well-known scientists and events, but also those that are not common knowledge. Significantly, the narrative notes the importance of women and people of color in science and the considerable achievements of non-Christians.

It is a rich and substantial book with a noble purpose. “By examining the subject both chronologically and thematically,” the authors write, “‘Discovery and Revelation’ seeks to highlight any patterns that may arise, which in turn could provide new ways of approaching moments of conflict and congruence that we cannot yet imagine.”

The astronomer and Jesuit brother Guy Consolmagno could well add a prayerful amen to “Discovery and Revelation”. Brother Consolmagno is a physicist and director of the Vatican Observatory. His new book, “Finding God in the Universe”, is a kind of homily on science and religion.

It is a deeply personal book. “I meet God with the same tools I use to meet the universe: my senses, my reason, my imagination,” he writes in his conclusion. “That is to say, I use everything that makes me human: my freedom, my memory, my understanding and all my will.”

This is powerful testimony from a world-class scientist. As a man of faith and reason, he relies on the skills and abilities God gave him to define science as a kind of act of prayer.

Both books emphasize that science and faith are, indeed, partners in the search for truth. The authors take up the words of Saint John Paul II from 1987 at the Vatican Observatory. Scientists and theologians must move forward in unity to find the meaning of life.

Also interesting: “Extraterrestrial intelligence and the Catholic faith: are we alone in the universe with God and the angels? by Paul Thigpen. Tan Books (Gastonia, North Carolina, 2022). 456 pages, $29.95.

Walch is a historian of American Catholicism and the author of “Parish School”.

The 2023 census will not ask questions about religion, ethnicity

UP woman accuses man of hiding his religion and living with it for months: police