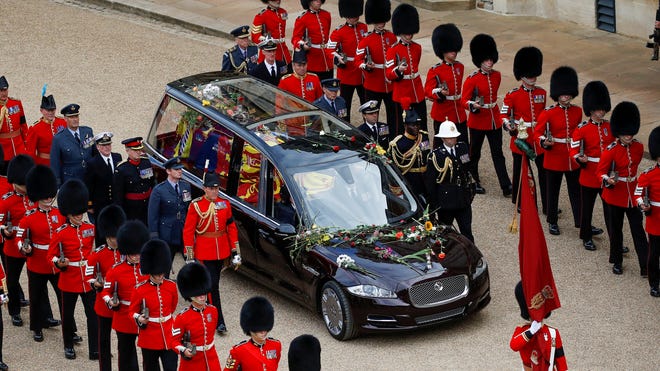 At her husband’s private funeral, Queen Elizabeth II sat alone by the altar in St. George’s Chapel, socially distant from her family and wearing a black pandemic mask.

This searing portrait of grief moved viewers around the world. And as Prince Philip’s coffin was lowered into the vault of Windsor Castle, singers chanted the Kontakion of the deceased, a link to his Orthodox roots in Greece.

“Give rest, O Christ, unto thy servant with thy saints,” they sang, “where sorrow and pain are no more; nor sigh, but eternal life… We all go down to the dust; and weeping on the grave we sing our song: Alleluia, alleluia, alleluia.”

Only 18 months later, the same song, which Queen Elizabeth had requested, was performed in the same chapel. This time it marked the start of the Liturgy of Commitment that capped a 10-day flurry of political art, vigils, memorials and processions preceding his stately state funeral.

The Queen’s last intimate service at Windsor Castle began where her husband’s ended, as if one rite spilled into another.

“Queen Elizabeth was one of those people in this mortal life who always thought ahead,” said David Lyle Jeffrey, Distinguished Senior Fellow at Baylor University’s Institute for Studies in Religion. When preparing for these rites, the Queen was “clearly looking for prayers, scriptures and hymns that created the bonds she wanted to make for her family, her people and the world. … I think she succeeded brilliantly. “

An Anglican from Canada, Jeffrey said the events closing the Queen’s historic 70-year reign were a fitting time to explore “the essence of her admirable Christian character”. Thus, the retired literature professor wrote a poem after her death – “Regina Exemplaris (An Exemplary Queen)” – saluting her constant and constant faith. It ended with:

“…She who wore the heavy crown longest/ Knew only to kneel before the invisible throne/ And plead the cause of her people as her own,/ And there to praise the Lord of all, bowing down,/ More conscious of her glory that she high renown, / Exemplary thus in worship, in praise more worthy of the Name.”

After the Kontakion of the Dead, Bishop David Conner, the Dean of St. George’s Chapel, highlighted the importance of this shrine to Queen Elizabeth. She had worshiped in Windsor Castle Chapel as a daughter, sometimes singing in the choir and taking piano lessons from organist Sir William Henry Harris. The Queen included some of her music in the incarceration service.

“We are compelled to remember,” said Conner, “someone whose simple yet profound Christian faith bore so much fruit…in a life of unstinting service to the nation, the Commonwealth and the rest of the world, but also, and above all, to be remembered in this place, in the kindness, solicitude and reassuring care for his family, his friends and his neighbours.

“In the midst of our rapidly changing and often troubled world, her calm and dignified presence gave us confidence to face the future as she did, with courage and hope. … We pray that God will grant us the grace to honor his memory by following his example and that with our sister Elisabeth, we will finally know the joys of eternal life.”

The committal service also included verses from the Book of Revelation read at the 1952 funeral of the Queen’s father, King George VI. This reading included these familiar words: “I heard a great voice from heaven saying, Behold, the tabernacle of God is with men, and he shall dwell with them, and they shall be his people. …And God will wipe away all tears. their eyes, and there will be no more death, nor mourning, nor outcry, and there will be no more pain, for the first things are past.”

Among the many texts selected for this funeral – from the Book of Common Prayer, the King James Bible and other classics – Jeffrey was struck by the end of the famous hymn “Love Divine, All Loves Excelling” by Charles Wesley.

“She chose this text with an exquisite literary and spiritual sensibility,” he said, “knowing the power of these words – especially the image of the ‘crown’ – when heard at a funeral. ‘a queen.” The last lines of the hymn proclaim:

“Transformed from glory to glory, until we take our place in heaven, until we cast our crowns before you, lost in wonder, love and praise.”

Terry Mattingly runs GetReligion.org and lives in Oak Ridge. He is a principal investigator at the Overby Center at the University of Mississippi.