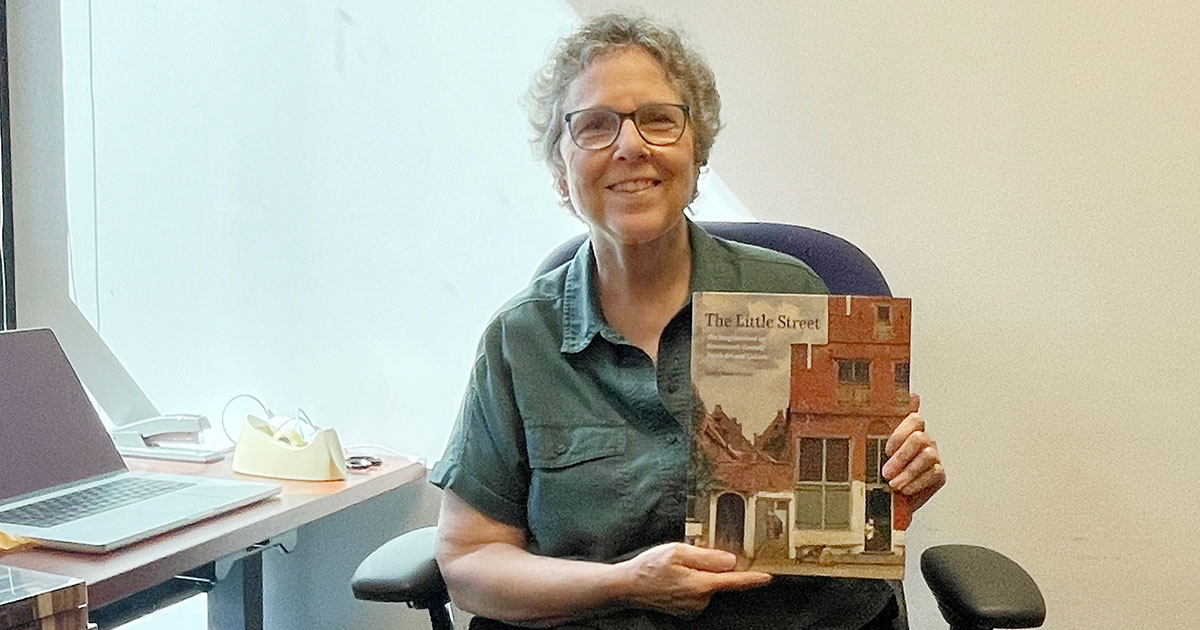 LAWRENCE – The importance of knowing what’s going on in your neighborhood and defending its honor is at least as old as comparable societal expectations in the 17eof the Netherlands of the last century, according to a new book by a University of Kansas art historian. Numerous Dutch paintings of a range of subjects – scenes of streets, domestic life, occupations and festivities – have transmitted and reinforced these values ​​to contemporary viewers.

This is the conclusion of Linda Stone-Ferrier after analyzing a range of 17eDutch Golden Age paintings in a new context: that of the neighbourhood. His book, “The Little Street: The Neighborhood in Seventeenth-Century Dutch Art and Culture,” has just been released by Yale University Press after a 14-year research, writing, and editing process.

A teacher of 17eof Dutch and Flemish Art of the Last Century in the Art History Department of the KU Kress Foundation, Stone-Ferrier realized that she would begin research for a book like “The Little Street” when, for chance, she read an article on 17eDutch neighborhoods of the last century by sociologist Herman Roodenburg.

In the introduction to the book, she writes that the studies of art historians tend to compartmentalize works by subject, such as landscapes or scenes of everyday life, “assuming that each category raises problems of interpretation distinct from others. In a revision of this paradigm, I argue that certain seemingly diverse subjects share neighborhood as a meaningful context for analysis.

Furthermore, Stone-Ferrier wrote, her book challenges the assumptions of scholars that categorize “imagery in paintings into a binary construct of ‘private’, understood as the female domestic sphere, versus ‘public’, synonymous with the male domain of the city. ..”

The neighborhood was a “liminal space” between home and city that encompassed people of all genders, religions, social classes, nationalities and political persuasions, she wrote. In fact, Dutch citizens in the 1600s had to formally belong to and participate in their neighborhood organizations – much like today’s household associations – which collected dues, enforced neighborhood rules, and held mandatory meetings and meetings. annual group meals. Using exquisite record keeping from centuries ago and today’s digital resources, Stone-Ferrier was able to research, among other things, relevant subjects of paintings and the identity and professions of Dutch citizens who possessed them that informed his research. The art collection was important, Stone-Ferrier said, for a broad and deep urban middle class whose wealth was generated by commercial enterprises such as the Dutch East and West India companies.

And it is clear, from an analysis of this art and a range of documents, that what happened in the street and around the corner was important for the Dutch of that time – just as it was for the locals. parts of the world today.

“Honor is the word the Dutch use in their neighborhood regulations and in other contexts as well,” Stone-Ferrier said. “Honor had to do with how we behaved. Acting honorably in all endeavors – personally, at home, in your business – was highly appreciated. The honor or dishonor of an individual reflects on that of the whole neighborhood. It was an integral link. This is why there were documented gossip and witness statements regarding the behavior of his neighbors.

One chapter is captioned “Glances, Glances, and Gossip” because – like today – not only are people curious about what the neighbor across the street is doing in their driveway, or what’s going on with those Rottweilers around the corner, but they want to make sure people don’t misbehave or break communal rules.

Converting illegal activities from religion to the name of religion will not be tolerated: CM