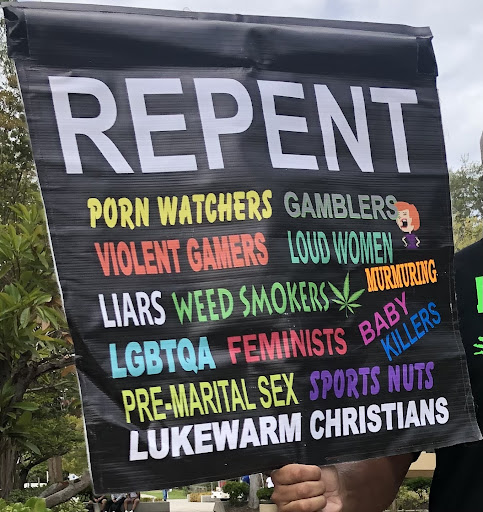 See You in Hell – The Rampage Online

Oh religion, the inescapable nuisance that surrounds me wherever I go.

Look, I have no problem with people who identify as religious. My problem is with people who think they can ram their beliefs down my throat with the harmful ideologies that come from these religions.

On September 19, I walked onto campus, listening to music and minding my own business. About 60 feet away and I notice a man, who certainly doesn’t care about his own business, holding a sign with the word “repent” in giant letters while shouting into a megaphone how me and other students are doing hell.

You guessed it. He did not give the time of day to those who wanted to state their differences. He simply replied with Bible verses.

Unless of course you are as hateful and closed-minded as this “Christian”.

That’s what I mean when I talk about harmful ideologies. The religious trauma is real.

Addictions are real and it is a disease that plagues people. Sentencing someone to hell by yelling at them isn’t going to magically cure them.

Women are allowed to be as loud as they want and deserve the right to their own bodily autonomy. People love who they love.

Why is it okay for someone to come onto campus preaching hate to a diverse group of students who I’m sure almost everyone matches at least one of the many descriptions on their sign? I know I do. How are students supposed to feel safe on campus if they are reprimanded by a hateful man?

Yes, I understand what freedom of expression is and I understand its importance. I’m a journalism major after all.

But, college campuses are permitted to prohibit non-students from using facilities, including preaching. And in my ideal college experience world, I would really like to walk around campus without being sentenced to hell.

Protests in Iran: Why the country’s women are rebelling