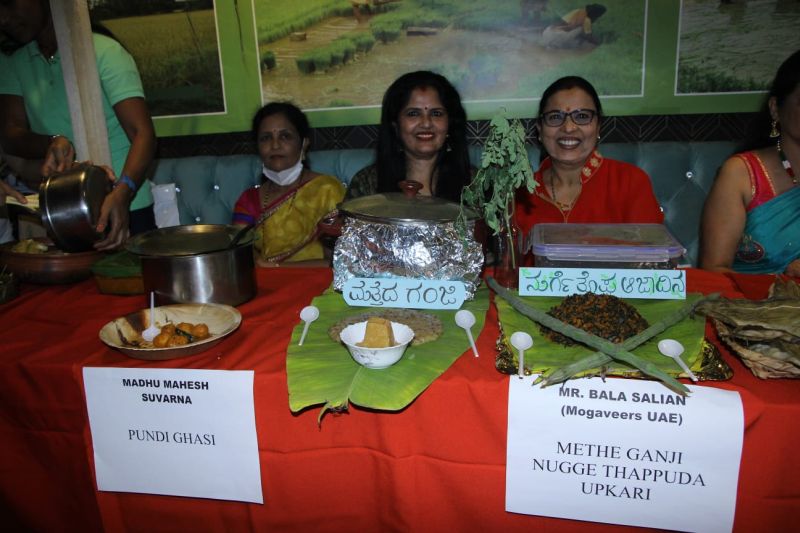 UNITED ARAB EMIRATES: SCENT (Sandhya Creations Event Network Team) in association with Fortune Plaza Hotel (A Praveen Shetty Enterprise) concluded the first ever ‘Aatidonji Dina’ cultural program on August 14, 2022 at Fortune Plaza Hotel, Al Ghusais which was an overwhelming crowd over 1500 Tuluvas from all over the UAE flocked to the event venue to create a festive atmosphere after a long time and became a historic event for the first time to see the uncontrollable audience rushing inside locals and enjoy five hours of the event just by rapping, eating and dancing everywhere. Admission, food, prizes and entertainment were absolutely free for everyone, which had never been done before. This scene was a new concept and has never been seen in any of the Tuluva events in the history of events in the UAE.

The program as planned started at 10 o’clock sharp with the traditional drums inviting and welcoming the guests of honour, the true representatives of the three religions of India; Hindu, Muslim and Christian; showcasing community harmony on a platform on the soil of the United Arab Emirates, a country and leaders with a proven record of religious tolerance in this part of the world.

With respect and honor, ‘SCENT’ welcomed Pujya Shri Bahushrut Swami – BAPS Hindu Mandir. He is an electrical engineer and worked in Bangalore before becoming a sadhu. He gives his Seva in the Public Relations and Outreach Department of BAPS Hindu Mandir Abu Dhabi. He is fluent in Hindi, English, Marathi and Gujarati. He became Sadhu in 2015.

Another guest, Pujya Guru Shri Nayan Swami – BAPS Hindu Mandir. Professionally, he is an electronics engineer. Attained Diksha in 2013 by Pramukh Swami Maharaj. He studied Swaminarayan philosophy, Sanskrit, Gita, Bhagwat Puran, Mahabharat and Ramayan. He is the international singer of BAPS. Currently in charge of activities for children and young people in the Middle East. He is also a Kirtan/Bhajan singer.

Rev. Victor Fernandes – St. Mary’s Church Dubai was also a guest of honour. He was born in Nellikar, Mangalore Taluq and educated at St. Aloysius and graduated from Canara College, Mangalore. He did philosophy in Bangalore and theological studies in Mysore. He was the Principal of Milagres English Medium School, Kalyanpur. Became a priest May 1, 2000. Served in Mizoram, Assam, Moodubelle &; Brahmvar. Currently in Dubai since June 28, 2022 serving St. Mary’s Church.

The four multi-faith guests on stage were received and honored by SCENT representatives with a shawl, flower, garland and fruit basket with due respect. All guests spoke words of wisdom, faith and humanity and agreed that the SCENT-designed program is an example to the world of putting aside differences of opinion and embracing each other. as human beings respecting each other’s faith by setting an example for others to follow. They also thanked the leaders of the United Arab Emirates for enabling people of different faiths to live in harmony and enjoy their freedom of religion in this part of the world.

This was followed by the traditional lighting of the auspicious lamp and the actual Tulunadu opening the ‘Pingara’ and inaugurating the program and the blessing made by the guests of honour.

Shortly after the auspicious inauguration, all the honored guests delivered speeches on the event and the richness of the Tulunada ‘Aatidonji Dina’ celebration. They declared together that it will be part of the event and a good initiative of the organization which tries to keep alive the spirit of faith and religion in this part of the world and which will help the next generation to continue and transmit to the next generation. .

The food festival was held in an atmosphere created with village-like tents with displays of over 70 varieties of Tulunada ethnic dishes on display from corner to corner. Plus a display of various artifacts from yesteryear for the public to view.

Over 26 participants presented over 71 varieties of ethnic Tulunadu dishes, all prepared at home, some of which are rarely available anywhere these days. They not only showed the importance of our ethnic food, but also provided an opportunity for today’s generation to taste fresh and healthy foods that have their own significance. The food included rich traditional cuisines that were never available in any restaurant and were specially prepared with love by the members of Tulunadu who decorated it with the real touch of Tulu Nadu cuisine.

All guests arrived at the food expo venue and inaugurated the venue with the red ribbon cutting. The food festival counter was opened to the public and they started flavoring the various dishes of Tulunadu and savoring the maximum taste of it, the aroma of which spread throughout the hall.

Lucky visitors won various prizes and all participants were honored for their contribution.

The whole program was free on FB/Whatsapp and was streamed live on FB and Youtube for those Tuluvas to enjoy all over the world.

All in all, it was an event that will be remembered forever.

The multiverse is a religion by any other name