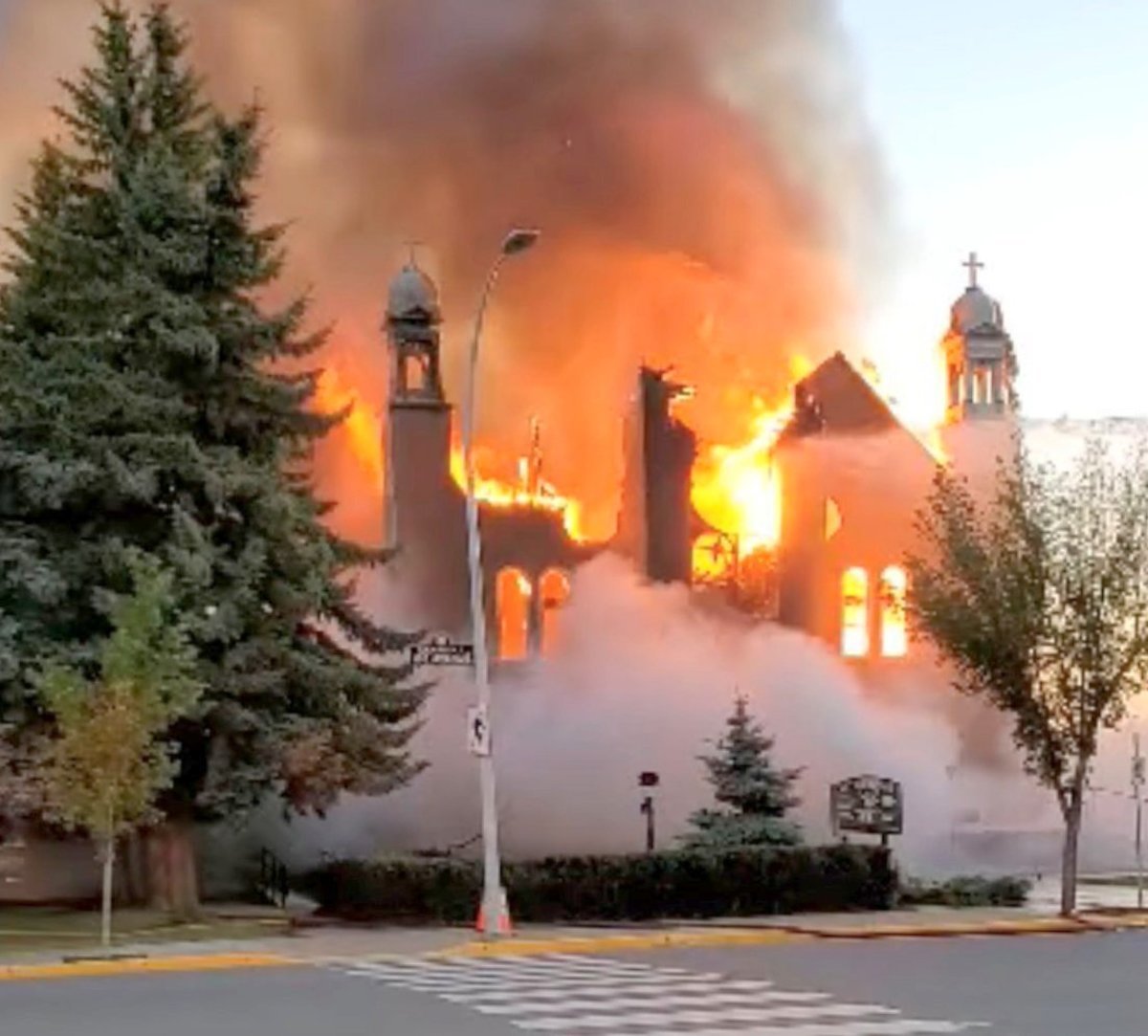 Response to Church Attacks “Indicating Hate and Intolerance” for Religion: League of Catholic Rights – BC Catholic

The more than 20 arson attacks and vandalism attacks on churches across the country have been widely seen as a response to the recent identification of long-lost graves in abandoned residential schools.

â€œTo their credit, it was the indigenous leaders who made the strongest statements against acts of violence,â€ said Christian Elia in an interview with The British Columbia Catholic. â€œThere were a lot less other civilian leaders and even law enforcement, quite frankly.

â€œWhat is alarming for the Catholic Civil Rights League is how much this response really reveals hatred and intolerance towards organized religion, especially ours. I think many Canadians, even though they consider themselves to be very inclusive and very tolerant, conveniently make an exception when it comes to organized religion.

Elia’s voice was one of many alarmed voices following the explosion of physical and verbal attacks on churches, including more than a dozen fires. Yet by the end of the first week of July, few political leaders or law enforcement officials had condemned the attacks.

One of the few was Alberta Premier Jason Kenney, who said on Twitter that the Morinville church fire “appears to be another violent hate crime targeting the Catholic community.”

Prime Minister Justin Trudeau said the church fire was “unacceptable” when asked about the attacks at a press conference on record temperatures across the country.

A spokesperson for an organization that is often the target of hate crimes said it is clear that the attacks meet the criteria for hate crimes. Nicolas Slobinsky of the Center for Israeli and Jewish Affairs in the Pacific Region said that hateful and anti-Catholic attacks – whether verbal or physical – “should be investigated as hate crimes by the police “.

Slobinsky said his community “shares the pain, anger and frustration felt by many across Canada over the discovery of several anonymous graves at former residential school sites,” but the violence is no longer there. not the correct answer.

â€œWe join in the growing condemnation by indigenous leaders, elected officials and others of arson,â€ he said. The British Columbia Catholic. â€œAs a society, we have a lot of work to do for truth and reconciliation, but targeting places of worship will not help us build a better future. “

Peter Noteboom, general secretary of the Canadian Council of Churches, said in an interview that the apparent increase in hate crimes against Christian churches is of growing concern to his organization.

â€œI also know from conversations with some of my colleagues from other religious communities – the Jewish community, the Muslim community, etc. together, â€Noteboom said. “It’s a new conversation, however, so it’s going carefully and slowly.”

Deacon Andrew Bennett, director of the Cardus Religious Freedom Institute, said that while anger against the Church is understandable in light of what happened in residential schools, â€œthe violence is inexcusable. And if there’s one thing history has taught us, it’s that violence breeds violence and the last thing we want to do is create new victims. Watch the full interview with Father Deacon Bennett.

But at least one community leader in British Columbia who could have joined in such a conversation and advocated for the rights of Canadian Catholics instead used the news of arson attacks to fan the flames of anti-Church hatred.

This happened on July 1 when, in response to a VICE News report that two other Catholic churches had been “burned down,” Harsha Walia, executive director of the BC Civil Liberties Association, tweeted “Burn it all”. She then argued that the comment was metaphorical, a position ultimately supported by the association’s board of directors. A handful of other commentators also expressed support, including Gerald Butts, former senior adviser to Prime Minister Justin Trudeau, who called the Tweet “understandable.”

Nonetheless, the most common response to Walia’s statement was condemnation. “I thought it was just disgusting and reprehensible that someone who runs an organization like this would make such comments,” British Columbia Solicitor General Mike Farnworth told reporters. â€œIt is despicable beyond belief, it does nothing to bring about reconciliation. All it does is create conflict and division.

â€œIt’s a very reckless statement to make, condoning this type of violence, this type of behavior,â€ Ross said. The Catholic of British Columbia. “That’s not what we need right now.”

The Vancouver Police Department has not confirmed that it is investigating the tweet as a hate crime. Spokesperson Const. Tania Visintin would only say by email: â€œWe are aware of the tweet and we are reviewing it. “

Established in 1962, BCCLA describes itself as “actively advocating for human rights and civil liberties through litigation, law reform, community legal advocacy, and public engagement and education.” No one at the association responded to British Columbia Catholic maintenance requests.

Derek Ross, Executive Director of the Christian Legal Fellowship (CLF), said The British Columbia Catholic that no one should equivocate the impact of arson in churches. â€œAttacks on places of worship must be condemned in the strongest terms,â€ he said in an email interview.

â€œBurning down a church is not just arson, where the damage is limited to bricks and mortar. It robs a community of their spiritual home and their right to fearless prayer, and sends a harmful public message that their very existence is intrusive. “

He also noted that while attacks on churches are to be condemned, â€œwe must not allow these acts to distract us from the important work that needs to be done to seek justice, healing and reconciliationâ€ with First Nations.

The Archdiocese of Vancouver issued a statement urging the faithful not to lose sight of the importance of advancing reconciliation, even as the Church is under attack.

“It is deeply distressing to hear the recent news of the burning and vandalism of certain churches,” the statement said. â€œThe right way forward is one of reconciliation, dialogue and atonement with Indigenous peoples and following how they would lead us through this process. ”

In a reference to verbal attacks on the church such as those made by Walia, the Archdiocese said: â€œIt is painful to find people in positions of local authority urging crowds to increase hatred and violence. Churches are made up of people, many of them here are made up of indigenous people, refugees and migrants – the same people we should all seek to protect rather than terrorize. “

Although no churches were set on fire in the Archdiocese of Vancouver, at least one church – St. Jude’s in East Vancouver – was vandalized on July 1 by two women who threw orange paint on the doors and windows. exterior walls. An email sent to Georgia Straight The publication of an anonymous account named “154 Years of the Canadian Angenocide” described the vandalism as “a stand-alone action in solidarity with the indigenous peoples of Turtle Island”. (Turtle Island is a name some Indigenous people and their followers use to describe North America.) The group also distributed photos and a video of the vandalism.

When asked about the St. Jude vandalism, Vancouver police said The British Columbia Catholic, “It is an open and active investigation”.

Across town, the Musqueam First Nation administration in Vancouver hired a security company on June 30 to protect its small church, St. Michael’s, from vandalism or worse. “We had received anonymous information about arsonists in the area and we wanted to mitigate the risks,” said Devin Sharma, administrative director of Musqueam. The British Columbia Catholic.

Days later, Vancouver Police teamed up with the Musqueam to install a high-tech, multi-camera security system that can alert police to suspicious activity around the church. At least one other parish in the Metro Vancouver area, which asked to remain anonymous, also requested police protection over the weekend after Canada Day after receiving a disturbing letter.

Across Canada, more than a dozen churches have been destroyed or damaged by fire in recent weeks, and many more have been vandalized. Much of the destruction took place in churches which, ironically, served indigenous peoples. As the National post reported on July 7, it was often the First Nations themselves who were “left to pick up the pieces” after the coals cooled.

The finding was similar to that shared two days earlier by three Indigenous women, who held a press conference in Vancouver calling for an end to the church fires. “We don’t spread hatred, we love people, we don’t destroy other people’s places of religion,” Jenn Allan-Riley told reporters. “We are asking the people who are starting these fires to stop now.”

She pointed out that the arson attacks had injured the very people the vandals claimed to support by triggering traumatic feelings. â€œBurning churches is not in solidarity with us, the indigenous peoples. “

Vatican official concerned about “hijacking” of religion by populist…