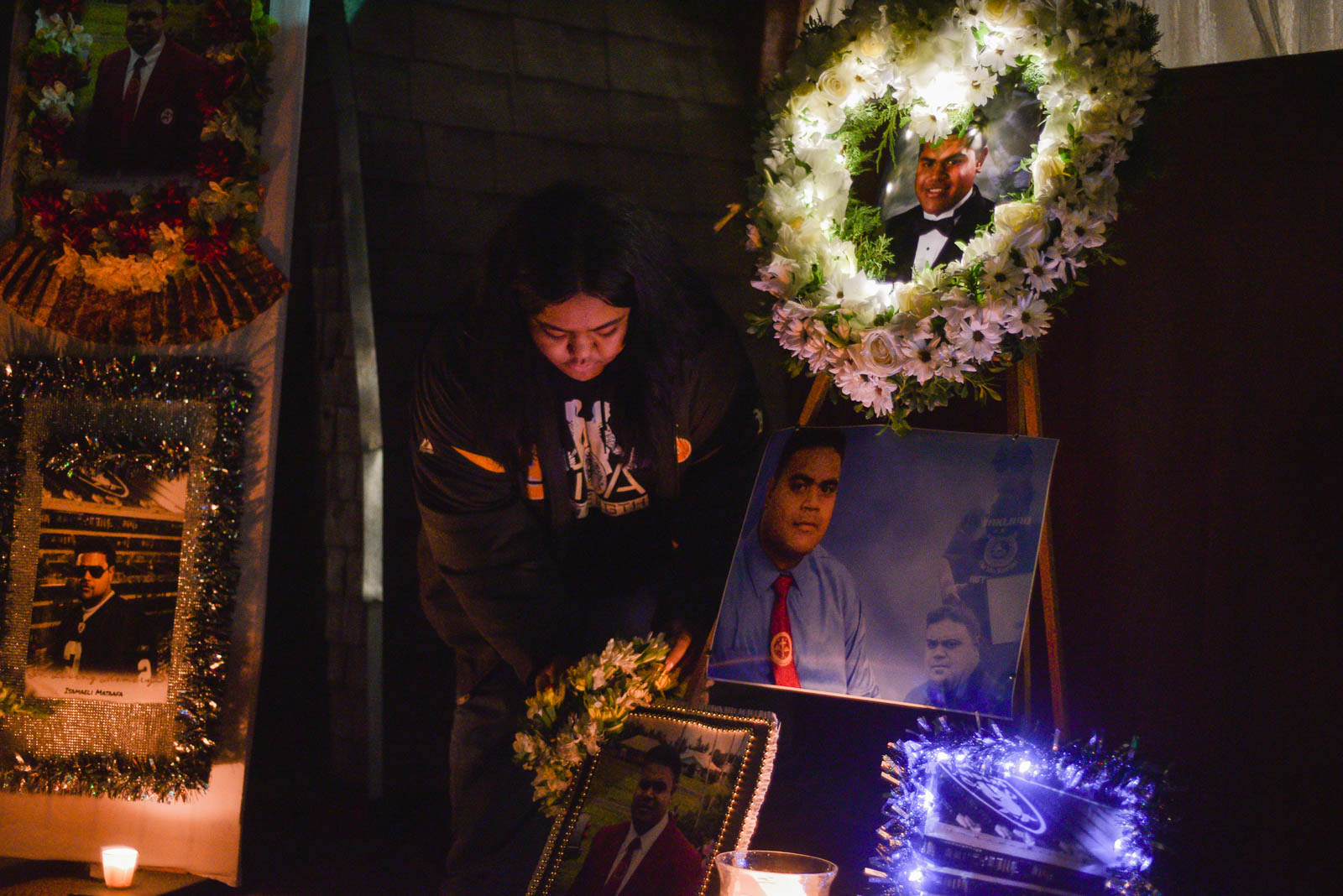 About 100 people gathered at an East Bay church on Thursday night to honor Isamaeli Mata’afa, a compassionate and community-minded 29-year-old theology student at the Pacific School of Religion who was killed in the of a shooting last weekend on Telegraph Avenue in Berkeley.

Framed photographs of Mata’afa decorated with flowers formed an altar outside the San Lorenzo Community Church. Mata’afa had grown up as part of a largely Samoan congregation and later played a pivotal role as a youth pastor. On a small stage, friends, family, teachers, and members of the congregation remembered Mata’afa, whom they called Eli, or Ish, for his boundless spirit, faith in God, and service to young people in his community. .

Donate to a GoFundMe started by Eli’s sister, Mitaina

“Eli, we love you and we will always miss you. You are never forgotten and your spirit will always live on within your community and your church,” said Taunu’u Ve’e, who had known Mata’afa for that he had joined the congregation as a child.His brother, Reverend Ulysses Ve’e, takes care of the congregation.

“He had this incredible vision,” Ve’e said, describing him as a mediator who tried to resolve conflicts. “The bottom line was, ‘What can we do for our young people? “”

It was the first time in recent memory that the congregation had lost someone to violence, and the death of Mata’afa, who was so central to the church, stunned the congregation. The vigil was organized by teenagers from the youth group that Mata’afa helped lead.

Mata’afa died early Saturday morning after a shooting that police say stemmed from a fight that broke out earlier. Three other men, aged 22, 24 and 28, were also shot dead and taken to Highland Hospital for treatment, police said.

It was the third gun violence death to affect the Berkeley community this month. On October 1, two Berkeley High brothers were killed while attending a birthday party in North Oakland.

Mata’afa is remembered as being “there to elevate any difficulty”

Isamaeli was the fifth child in a family of seven who immigrated to San Lorenzo from American Samoa 20 years ago, joining a close-knit Samoan diaspora community. In San Lorenzo, the church became a center of Mata’afa youth and, later, adult life. He was studying to be a pastor and hoped to one day lead a congregation in the Samoan Congregational Christian Church.

During the vigil, Mata’afa’s father, Voloti, thanked the community several times for their presence.

“I miss my son,” he said. Looking at the crowd standing before him, many of whom were holding candles, Voloti said he saw among them “the spirit of my son” pouring out for “all those in need”. “I am very happy to see all these people coming out to support what has happened to me and my family.”

Mata’afa’s siblings have written about their brother’s loss online. “You were always there when I needed you,” her older sister, Carrie, wrote on Facebook, posting a photo with her family and Eli. “You [were] always there to raise any difficulty and always remind us. That there is a God.

His sister, Mitaina, started a GoFundMe to raise money for their family, writing that Eli was the primary breadwinner for their parents. “This loss will deeply affect our family for years to come,” she wrote.

Mata’afa aimed to transform communities through his ministry

Mata’afa was a student in the Master of Divinity program at the Pacific School of Religion, where he was studying to become an ordained minister. During the vigil, his teachers described him as a charismatic student dedicated to deepening his faith and putting it into practice.

We “try to see people as God might see them,” said Leonard McMahon, an assistant professor who taught Mata’afa in a New Testament class this fall. “Eli was not only good at it, he was the best at it. He inspired us to see into and through people, into their hearts.

“His life and ministry already had clear signs of how he would transform the communities he was part of,” said Reverend David Vásquez-Levy, president of the Pacific School of Religion.

Vásquez-Levy said Mata’afa dug into difficult texts, seeking to better understand some of Christianity’s most complicated issues. In preaching class, Mata’afa chose to examine a text called The Syrophoenician Woman, about a stranger who stands up to Jesus. Vásquez-Levy said he connected with his own Samoan community “by finding ways to claim his rights”.

Mata’afa enrolled at the Pacific School of Religion on a Presidential Scholarship, which is “awarded to the top incoming students who best exemplify PSR’s mission,” according to a statement from the school.

Prior to attending the Pacific School of Religion, Mata’afa graduated from Kanana Fou Theological Seminary in American Samoa.

Tipisone Tuiolemotu, who befriended Mata’afa in Kanana Fou over countless evenings of sharing stories and wisdom, said he envied his friend’s ability to see the good in things.

“Eli could see love and compassion when you felt there was nothing to love and be compassionate about,” Tuiolemotu said. “I would rather live 29 years looking at this world, through the prism of love, than live an eternity looking at the pain.”

Tuiolemotu held up three fingers to represent the Father, Son, and Holy Spirit, and asked the crowd to do the same. When he turned his hand to the side to make an “E,” Tuiolemotu said it represented Eli. “Kisses to heaven,” he concluded. “We love you.”

After the speeches, the teenagers in the youth group sang hymns in English and Samoan, including one of Mata’afa’s favorite worship songs – Sweet Holy Spirit. Members of the congregation joined in and, in the Samoan tradition, the chanting lasted over an hour.