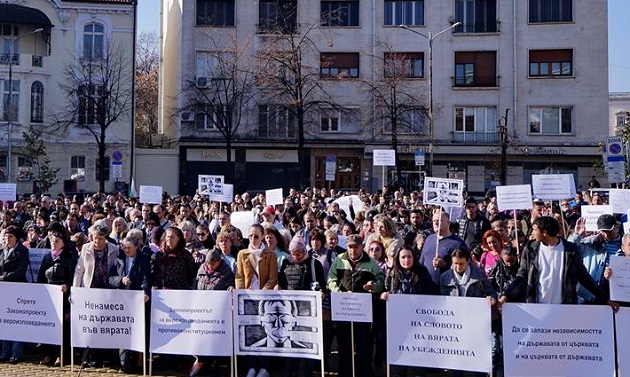 Bulgarian evangelical Christians have received support from several international organizations, after the Bulgarian Evangelical Alliance warned against drafting a new law on religion that would severely restrict religious freedom.

“We have learned of the adoption on first reading of a law on religious freedom in the Parliament of the Republic of Bulgaria (…) which restricts the exercise of religious freedom,” said one letter to the Bulgarian Ambassador to Spain, signed by the Secretary General of Spanish Evangelical Alliance (AEE).

The bill, the letter said, would control foreign funds received by religious minorities, interfere in theological teaching and establish state controls over ministers. If the law is passed, “the Bulgarian state would inadequately assume power over the internal life of religious communities,” writes the Spanish Evangelical Alliance.

“Almost all of the articles in these new legislation imposes political authority over religious life wrongly, ”says the letter signed by EEA Secretary General Jaume Llenas.

As a result of the proposed law, “thousands of citizens would be placed in a situation of fragility and the exercise of one of their fundamental human rights would be restricted: religious freedom”.

Spain has a past in which religious minorities have been persecuted, explains the EEA in the letter. “As a religious minority in our country, we know how fundamental and vital this freedom is, and how much suffering and injustice the denial of this essential right has caused in the past. We believe religious freedom is the foundation of a prosperous and open society”.

The letter sent to the Bulgarian Ambassador to Spain, Ivan Kondov, ends by saying: “We ask the Bulgarian Embassy in Spain to intercede with its government to stop the approval of this bill, and promote a more just law, which guarantees the religious freedom of all citizens. , whatever religion they adhere to”.

The Spanish Evangelical Alliance sent a similar message letter To Members of the European Parliament.

Does the creator of “Jesus is King” use religion and the Christian faith to manipulate people?