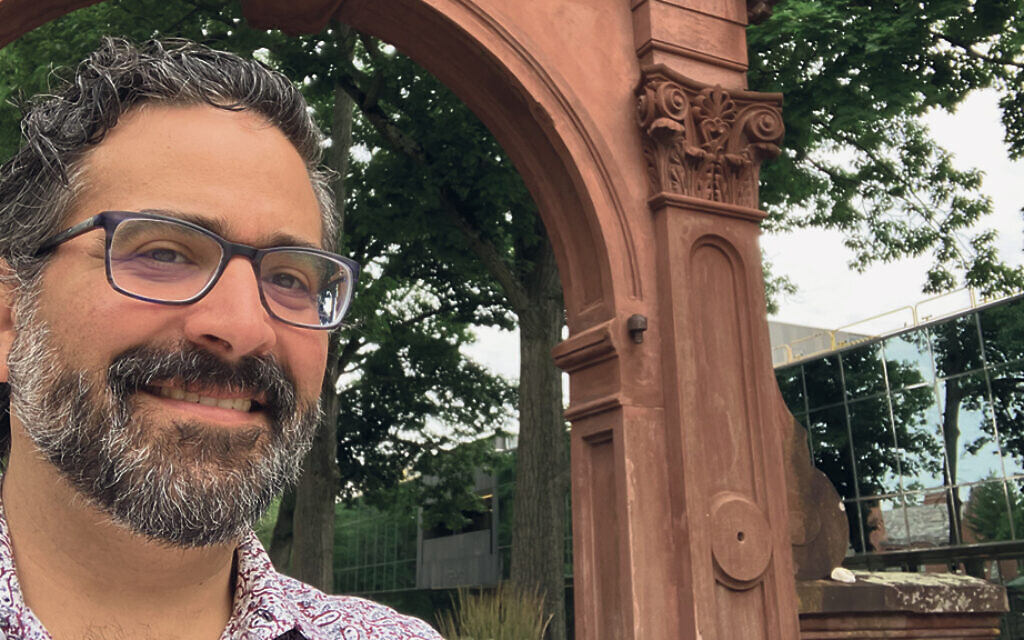 With hindsight, Dr. Jacob Ari Labendz doubts that his visit to Auschwitz at the age of 12 was appropriate for his age.

On the other hand, his childhood visit to Poland, which included the stop in the extermination camp, set the Montville native on the career path that has now taken him back to New Jersey as a manager. from the Gross Center for Holocaust and Genocide Studies in Ramapo. College in Mahwah.

“It was late August 1989,” Dr. Labendz said. “Communism was falling.” And a family friend wanted to see the cemetery where a relative – the first Jew in this town to be murdered by Nazi invaders – was buried. Dr. Labendz’s father was invited and he brought young Jacob.

In Poland, they met the people who had taken care of the upkeep of the Jewish cemetery. And they learned that a hoard of ancient Torah scrolls was stored in an old mikveh building that had been converted into a factory and apartments.

“We went under cover of darkness and found all these Torah scrolls, and smuggled them back to the United States” – where they were repaired and donated to area synagogues. He read one of them a year later, during his bar mitzvah at Congregation Agudath Israel in Caldwell.

But the memory that stuck with him the most from the trip to Poland “was the kiddush we had in the JDC cafeteria in Warsaw,” said Dr. Labendz; the JDC is the American Jewish Joint Distribution Committee. “I met some very old Jews. It was nice to be in their presence, nice to see that life had gone on.

“I became addicted. And so I went back on the March of the Living and USY pilgrimage to Eastern Europe. During this trip to Eastern Europe, Prague captivated him. So after graduating Brandeis—he had gone to Hebrew Academy in Morris County, then Solomon Schechter Essex and Union Day School in West Orange—he wanted to return to Prague. “I called everyone I knew. My rabbi, Rabbi Alan Silverstein, who was head of the Rabbinical Assembly at the time, said they needed a field worker in Prague, and I went there,” he said. -he declares.

This led to employment in a Jewish studies program in Prague and meeting the Jewish scholars involved in the program. “It sparked a passion I didn’t know I had” for history, a subject he had never studied in college, Dr. Labendz said. But with the encouragement of professors he met, he applied to the University of Washington, where he studied for a doctorate. in Jewish history.

His research topic: how the Czechoslovak state tried to manage the reintegration of Jews after the Holocaust and during four decades of communist rule.

“There was an ambivalence about the Jews,” he said. “There was both a commitment to their integration and deep and long-lasting doubts about the viability of this project.”

Immediately after the war, the new Czechoslovak government expelled ethnic Germans and Hungarians; there was no room for national minorities. Jews could stay, but they had to accept that Judaism was their religion, not their nationality; their nationality was Czech or Slovak. This was the market by which Jews had been accepted in France during the time of Napoleon, but it was new in this corner of Eastern Europe that Jews were told: “You must say that your national identity is the same as your neighbour’s. But you have freedom of conscience, you can believe in the Jewish God, you can go to the synagogue. In fact, they relied on Jewish communities to meet much of the needs of Jewish survivors, which would have overwhelmed the state,” Dr. Labendz explained.

But after the Communists took power in 1949, they followed the example of the Soviet Union and embarked on an anti-Zionist campaign, “because the Soviet bloc needed a unified enemy”, the official said. Dr Labendz.

However, this did not translate into a unified policy towards the Jews.

“Anti-Semitic show trials brought down the top Communist Party leaders who were of Jewish descent,” Dr. Labendz said. “At the same time, the communist government was dedicated to protecting the Jewish religion. He made exceptions for Jews in nursing homes to ensure they had butter instead of lard. In 1953, there was a shortage of meat, and a Slovak sub-ministry halted kosher meat production, saying it could not favor a religious group in allocating kosher slaughter. The central government in Prague overturned it and guaranteed kosher meat.

“So there was an anti-Semitic regime, but it was a particular anti-Semitism.”

Part of this support for Jews practicing Judaism was based on the idea that “future generations would not follow in the footsteps of their parents,” Dr. Labendz said. “They would be brought up in a socialist society and because their needs were met, there would be no material desire to become Jews.”

Ramapo College is home to the Gross Center for Holocaust and Genocide Studies.

This does not happen.

Yet, rather than reacting to Judaism’s failure to fulfill ideological predictions of decline by forcibly suppressing it, “there is a softening of the regime. There is even a willingness to provide cultural training in history classes for young Jews,” Dr. Labendz said. “It’s a very complicated story.”

Dr. Labendz said the details of the history of Jews in postwar Czechoslovakia are tied to “central questions in modern Jewish history: Can Jews join the nation? What do we expect from the Jews?

He considers that the questions do not reflect outright anti-Semitism, but rather ambivalence, “anti-Semitism emerging from a more complex system”.

Dr. Labendz’s father was born in 1945 in Bolivia, to two 20-year-olds who had fled Germany with their families after Kristallnacht and met as children on the ship for South America.

“In 1947, they all immigrated to the United States of America, which had apparently been my grandfather’s dream all his life,” he said. “And it was thanks to my Aunt Betty and my Uncle Hans, who had gone to Cuba and arrived in America first. So they brought them over and my father’s family went to New York first, then in New Jersey since.

On his mother’s side, his family came from Nova Kiliya, which is now in Ukraine, but was part of Russia when they left around 1910 and part of Romania when Dr. Labendz’s great-uncle returned to visit in 1927 – and took a small camera with him.

“You can get an idea of ​​how they lived,” he said. “They were religious but not very religious. They seem to be middle class. They had a nice house. It’s my great-grandmother on video, which most people don’t have. We had a good idea of ​​who they were.

The bulk of his work at the Gross Center will consist of organizing the programming. Dr. Labendz hopes to increase cooperation with other campus departments and continue the center’s work with the surrounding community. He began meeting with rabbis from local congregations to discuss cooperation.

He will teach two courses a year, beginning in the fall semester with a course on the Holocaust. He has taught it in different forms since he was an assistant professor at the University of Washington. There, “I was grading some homework and I read a shocking first line,” he said. “One student wrote: ‘Unfortunately, I had no family that died in the Holocaust.’ It speaks to the centrality of the Holocaust in contemporary Jewish life and how Jews understand themselves as Jews.

Before coming to Ramapo, Dr. Labendz was the director of the Center for Judaic and Holocaust Studies at Youngstown State University, where few if any of his students were Jewish; some thought they might have a Jewish grandparent. He also taught students whose grandparents survived the escape from Treblinka – and would only talk about those stories in private assignments, not in class discussions.

“There is a real challenge in teaching about the Holocaust as the Holocaust moves from memory to history,” he said. “It is the duty of those of us who do this professionally to acknowledge the anxieties around it and then move beyond it. Many of us learned about the existence of the Holocaust by talking to survivors – and it will no longer be viable.

“We in the older generation have to let go of our expectations of what it means to learn more about the Holocaust and try to meet these students where they are. Maybe it’s a great-grandparent, or maybe they spent a week there in high school because New Jersey has a Holocaust education mandate. And that’s it. And they don’t see survivors, they see Jewish communities well rooted and relatively safe in the United States, where my mother, who is now the grandmother of the family, had a very good life growing up as a young woman in America.

“I try to give students space to relate to their own lives, while reminding them of the importance of context. History doesn’t repeat itself, but it can set patterns, and by studying the similarities and differences, we can learn more about our own world.

“Above all, I really emphasize that students need to learn more about the communities that have been destroyed. Otherwise, we are only talking about the human capacity to do evil in the broad sense. If you want to see the Holocaust as an attack on the Jews, you have to understand the place of the Jews in European society before the war.

“We owe it to them to learn something about them.

“This ties in with a major theme of my work on Czechoslovakia. In the 1960s and 1970s, young Jews began to complain about not being educated about Jewish life. They stopped going to annual Holocaust memorials because they had been there every year, they knew all about the Holocaust, it was a natural part of their lives as a whole community emerging from a genocide.