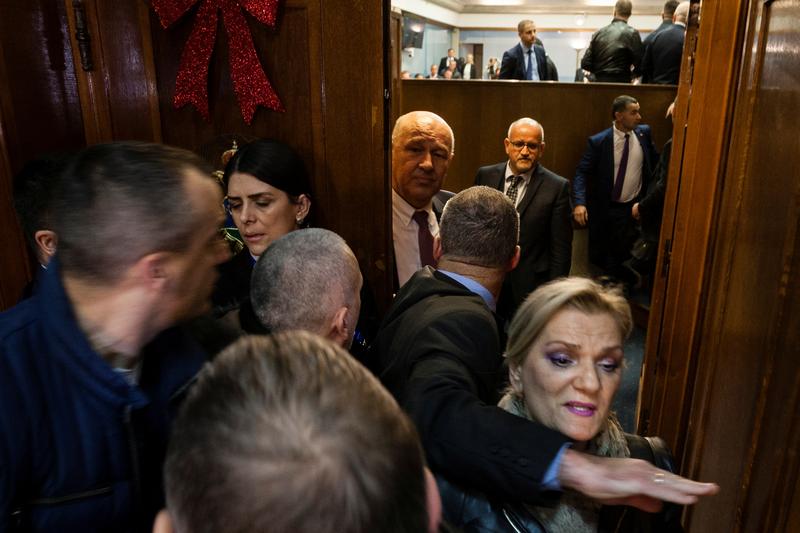 PODGORICA (Reuters) – Montenegro’s parliament on Friday approved a law on religious communities despite street protests and a last-minute attempt in the hemicycle by pro-Serbian opposition MPs to block the vote.

By law, religious communities in the small Adriatic state would have to prove ownership from before 1918, when predominantly Orthodox Christian Montenegro joined the Kingdom of Serbs, Croats and Slovenes, the predecessor of defunct Yugoslavia.

The pro-Serbian Democratic Front (DF) and other critics of the legislation say it is an attempt to promote the small Montenegrin Orthodox Church, which is not recognized by other large churches, to at the expense of the Serbian Orthodox Church, the dominant Church in the country of 620,000 inhabitants.

They also accuse the pro-Western President of Montenegro, Milo Djukanovic, and his ruling Democratic Socialist Party of corruption, links to organized crime and seeking to drive the country away from Serbia, its bigger neighbor.

DF MPs brawled with their opponents just before the vote, which took place in the early hours of Friday after a long nighttime debate.

Police first detained the 18 DF deputies, but then released 15. Among the three who remained in detention pending charge was DF chief Andrija Mandic.

“We said we were ready to die for our church,” Mandic told reporters after the crash.

Hundreds of opposition supporters and clergy took to the streets of Podgorica on Thursday to demonstrate against the law. Roads in the north of the country were also blocked for hours.

The Serbian Orthodox Church has around 12 million followers, mainly in Serbia, Bosnia and Montenegro. It has 66 monasteries in Montenegro, most of them dating from the Middle Ages, as well as dozens of churches and other real estate.

Patriarch Irinej, head of the church, called on the Montenegrin authorities to end what he called their “brutal terror”.

“His Holiness (…) demands the immediate release (…) of the political representatives of the Serbian Orthodox people in Montenegro”, he declared.

“We will help our people (in Montenegro), but we will not destroy the bridges with our neighbors,” said Vucic.

Montenegro separated peacefully from its former federal partner in 2006. It is now a member of NATO and, like Serbia, a candidate for membership of the European Union.