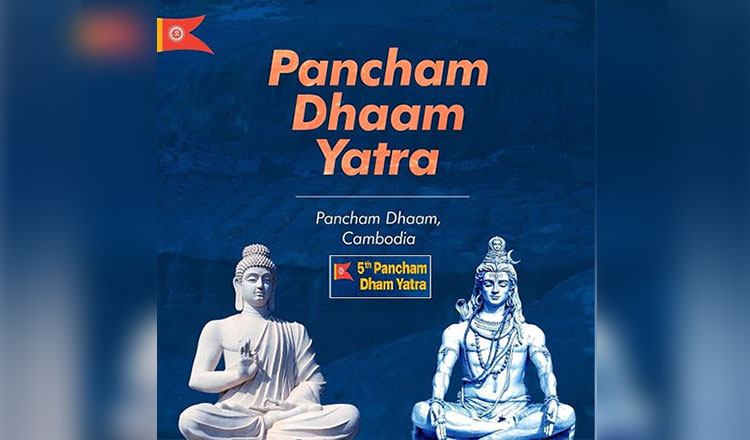 First time in the history of the world, the Hindu religion and the Buddhist religion meet and start a dialogue in Cambodia

Pancham Dham Trust revives the glory of Sanatana Dharma, paving the way for dialogue between the Hindu and Buddha religions in Cambodia.

In the history of the world, there is no evidence found so far of such collaboration.

This will also help to bring the countries of Southeast Asia closer together. With the ongoing developments, Cambodia will see an increase in tourism leading to the development of the country and the economy.

The Pancham Dham initiative started on June 1, 2018 and is in its 4th year. Pancham Dham Yatra is a symbol of spiritual dialogues and cultural relations between India and Cambodia.

At the recently concluded event, the Pancham Dham Trust (/topic/pancham-dham-trust) brought religious society from around the world together under one roof. The main spiritual leaders met during this holy Yatra; Indresh Kumar, India’s top brass Hindu ruler and chief monk His Holiness Tep Vong, Supreme Grand Patriarch, Samdech Preah Agga Maha Sangharajadhipati met on this occasion and discussed education, spirituality and culture in the region.

Pancham Dham has also started a Sanatan Sanskar Dhyan Kendra near the World Heritage area to facilitate Dhyan and Prasad as food for devotees. Pancham Dham also helps create a cordial atmosphere in Southeast Asia by bringing people and rulers together under one roof.

The Pancham Dham Nyas was formerly known as the Association of 1008 Names of Shiva and was able to follow the path of Sanatana dharma after the pandemic thanks to the endless efforts of Indresh Kumar, RSS veteran and torchbearer of the Sanatana movement Dharma in India, and Dr. Sailesh Lachu Hiranandani, the brainchild of the idea.

As Indians are proud of their heritage and love to see Indian heritage on a global front. And in the long run, it will help boost Cambodia’s economy by simply boosting tourism in the country.

The Monk King was delighted with the move and pledged his endless blessings and support to launch Sanatan Buddha University locally. “Pancham Dham is on a mission – to revive the glory of Sanatana Dharma”.

In the latest development, Pardeep Batra, owner of the Spice Garden Malaysia restaurant and his wife Ashima Batra also the administrators, have been tasked with opening the Pancham Dham hotel and restaurant for visitors traveling to Siem Reap, Cambodia, near the Pancham Dham meditation center. and the temple.

Over time, the event has seen leaps and bounds with people from all walks of life including saints, rishis, gurus, politicians, bureaucrats, diplomats, and people of all religions and faiths.

It is the first time in the history of the world that the Hindu religion and the religion of Buddha meet and start a dialogue in Cambodia.

The 5-day event in Siem Reap, Cambodia also saw a large number of followers fly in from around the world to be part of Pancham Dham. The overall development of Pancham Dham Nyas Dhyan Kendra takes place under the guidance and direction of Sailesh Vats. ANI/NewsView

Abortion was an ideological and spiritual struggle for the Baptist minister