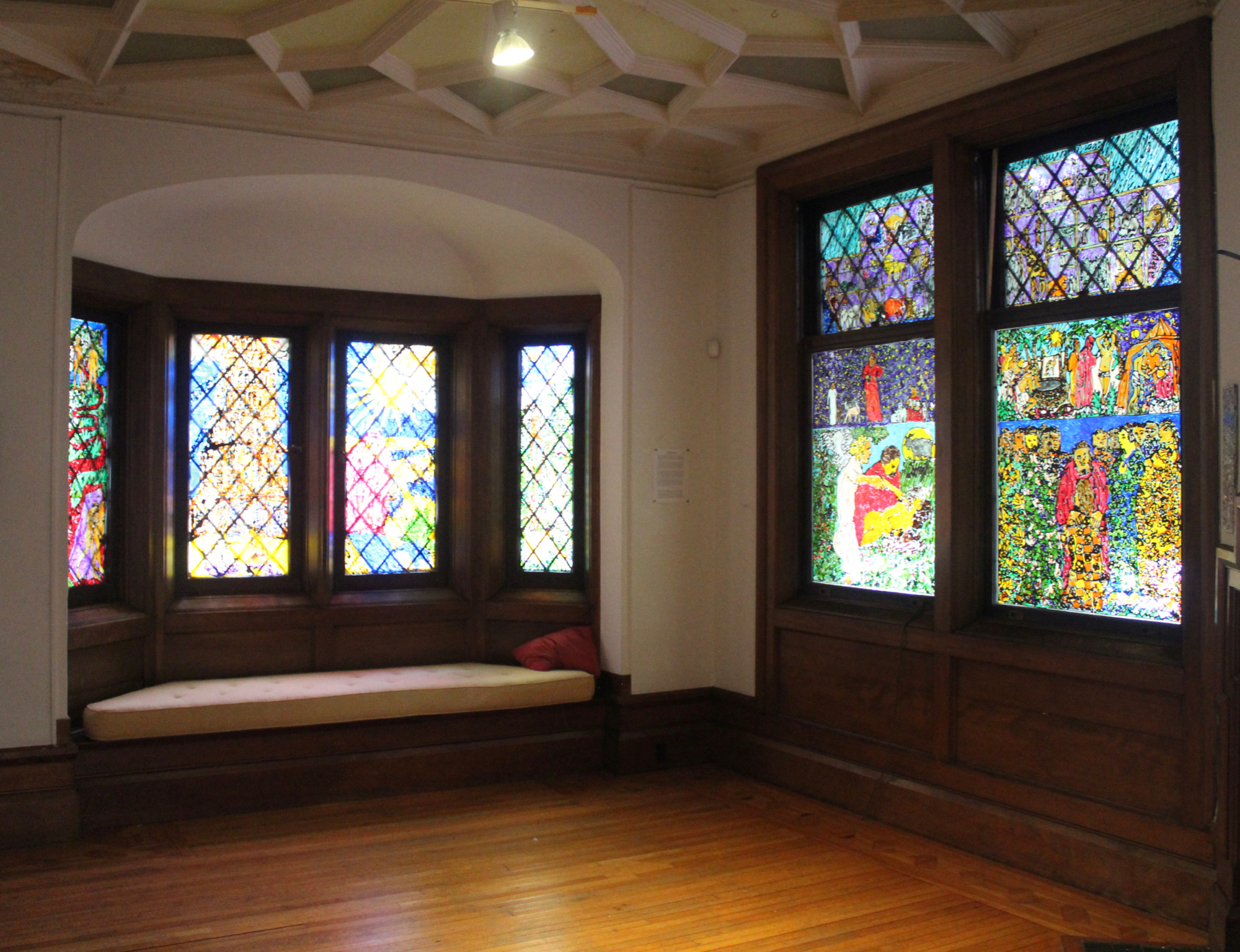 The small gallery on the first floor of the Ely Center of Contemporary Art is flooded with multicolored light. It darkens the room as a whole but has the effect of making the atmosphere more vibrant. The gallery becomes a place where you might want to linger, the same way people linger in all places bustling with color, from rooms adorned with Christmas lights to meadows full of wildflowers. It’s a place to take a breather and, in keeping with the theme of an exhibition currently taking place there, think about a new beginning.

The exhibition features window paintings and typographic prints depicting scenes from the Book of Genesis, as imagined by artist, art historian and curator Jonathan Weinberg. ​“Genesis” is now taking place at the Ely Center on Trumbull Street until January 5.

Glass paintings and prints ​“represent several years of work,” Weinberg wrote in an illuminating accompanying statement. ​“Undoubtedly, they are a response to the traumatic quality of our recent politics, covid, and be curled up with a small circle of friends and family. But also, they are influenced by my work as curator of the Maurice Sendak Foundation, and the opportunity it has given me to spend so much time with the extraordinary art of Sendak, as well as the prints of the artists who he collected, like William Blake and Félix Vallotton.

Weinberg discovered his art by experimenting with Plaid Gallery Glass, a substance intended to mimic stained glass. ​“My first paintings were installed in the windows of my house. Inspired by William Blake, I chose to depict Jacob’s Ladder, from Genesis, because its theme of transcendence always seemed to me to resonate with the artist’s task of taking mundane materials and transforming them into something wonderful. I associated this image with the building of Noah’s Ark, a story of salvation and hope amidst the most traumatic times. During the covid crisis, when I was stuck at home, I started doing prints, and I came back to these themes by re-reading Genesis and finding key stories that I could turn into pictures.

Weinberg first created the images on an iPad, edited them in Photoshop, and transferred them digitally onto the clear polymer. The windows are ​“full of allusions to famous works of art,” he wrote, ​“ranging from Masaccio to Blake, from Picasso to David, from Homer to Sendak. He delights in ​“to use such an unexpected and inexpensive medium to create a dramatic, even spiritual effect. This was for me the essence of Jacob’s dream, how in a completely banal place, resting on a hard stone, he fell asleep and dreamed of angels ascending to heaven, and of God’s grace.

Weinberg’s deeply human and humanistic interpretation of the Genesis story is widely exhibited in the typographic pieces also displayed in the same gallery. There’s the fact that he devotes an entire portion of the story of Noah’s Flood to a group of people who failed to get on the Ark, who were left to suffer the consequences. We are told that they were punished for their wickedness, but that is not what Weinberg portrays; it shows their confusion and fear, perhaps even their desire to repent, even though they know it is too late.

Likewise, Weinberg’s depiction of Jacob wrestling with the angel expresses his brutal physicality – the ​“the struggle” in the story was not a metaphor – showing Weinberg’s gift for showing complicated kinetic movement with just a few lines. It is also evident that Weinberg may have found himself curator of Maurice’s work Sendak There’s a sense of eerie playfulness similar to that found in the best work of the famous children’s author.

The windows then add another layer of meaning to Weinberg’s approach to scriptural history. Most of us are, of course, used to seeing stained glass primarily in places of worship. In these places, the stories are openly, perhaps by definition, given a reverential treatment. The Ely Center of Contemporary Art is a secular space, and almost more of a house than a gallery. Weinberg’s treatment of his subjects in stained glass mirrors his treatment of them in his typographic images. Weinberg is right that rendering his images in stained glass creates ​“a dramatic, even spiritual effect. But it also moves in the other direction. His approach humanizes stories, making them more relatable. He brings them back to earth.