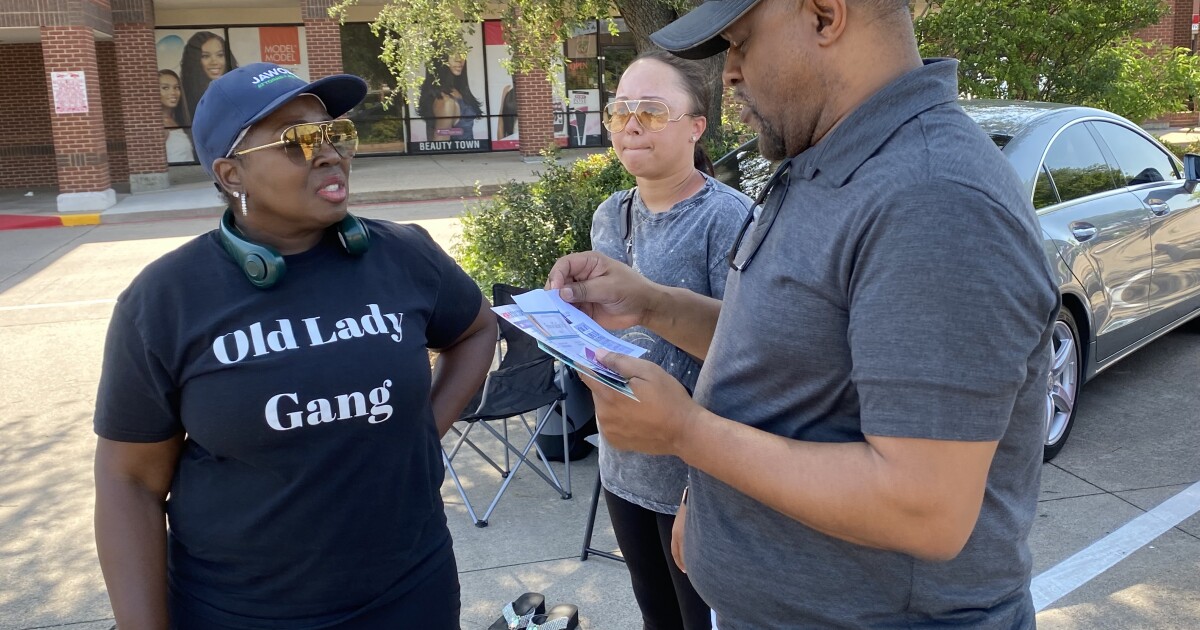 It’s afternoon during early voting and supporters of the two Democratic candidates vying for the seat of Congressman Eddie Bernice Johnson are busy catching voters before they enter a polling station in Desoto.

One of them, Mary Morris-Boneparte, is part of a group dubbed the Old Lady Gang, a name she says came about after she attended town and school board meetings promising to hold the elected officials.

Morris-Boneparte, 59, has lived in the district for 32 years and is a longtime Johnson supporter. But she says she’s not voting for Johnson’s favorite candidate – state Rep. Jasmine Crockett. Instead, she votes for Jane Hope Hamilton, a former aide to Congresswoman Marc Veasy.

“She has worked in this community for over 20 years,” Morris-Boneparte said.

The 30 Congressional District runoff is one of the most watched races of this election cycle. Whoever is elected will succeed veteran congressman Eddie Bernice Johnson, who announced her retirement last November.

Morris-Bonaparte’s friend Anna Williams, 73, said the neighborhood had many needs. It is a geographically large district that includes much of southern Dallas County.

“We have a food dessert. Our schools are collapsing… We need improvements. We need infrastructure on the street,” Williams said. “We need to have somebody who’s going to be faithful, that when she comes home, she comes home to say at a town hall meeting, ‘This is what’s happening.’ ”

Williams said she believes Hamilton – not Crockett – will bring a new vision to the district.

In the same parking lot outside Disciple Central Community Church, Crockett supporters claim she is the right one to succeed Johnson. Area resident Al Green said he thinks Johnson’s support will go a long way with voters.

“With all these contacts and all this seniority that she has, [Johnson] could easily help usher in a Jasmine Crockett through which she is able to not only make the right decisions for Congress 30, but also for the United States, because that is what this is all about,” said Green.

Political observers say whoever ultimately wins at the polls will lead a district that has undergone a lot of change. The once predominantly black neighborhood now includes more Latinos.

“When you just look at population, they’re actually equal,” said Valerie Martinez-Ebers, professor of political science and director of Latin American and Mexican studies at the University of North Texas at Denton. “They’re both about 42%. Now when you look at eligible voters, then of course African Americans have the advantage.

Martinez-Ebers said Latino voters still constitute a critical mass and will most likely vote for Crockett because of Johnson’s endorsement.

“Like other voters, many other voters, with the exception of evangelical Christians, they vote their pocketbook, they don’t vote their religion,” Martinez-Ebers said. “So obviously Eddie Bernice has been very good in his district. She served long enough to bring home the bacon for many projects.

Martinez-Ebers said Johnson has a good rapport with Latinos in the community, something his successor will need to have as well.

For longtime political observer Ed Gray, the focus on which candidate received which endorsements has overshadowed other topics.

“With gasoline being what it is today, $4.35, and some people are predicting it will be $6.00, how is this going to affect the people of 30 US Congressional District It’s not addressed,” Gray said. “Inflation. It is not processed. Searching for mentions seems to be what is being addressed. »

Gray said he hopes candidates in future elections will move beyond discussions of endorsements and focus more on the issues that matter to voters.

Political analysts have described the 30th District as “solid Democratic” or “safe Democratic”.

In the Republican second round, retired James Frank Harris opposes James Rodgers, a recruiter for a network of private schools.

Do you have any advice? Email Stella M. Chávez at [email protected]. You can follow Stella on Twitter @stellamchavez.

KERA News is made possible through the generosity of our members. If you find these reports useful, consider make a tax deductible donation today. Thank you.