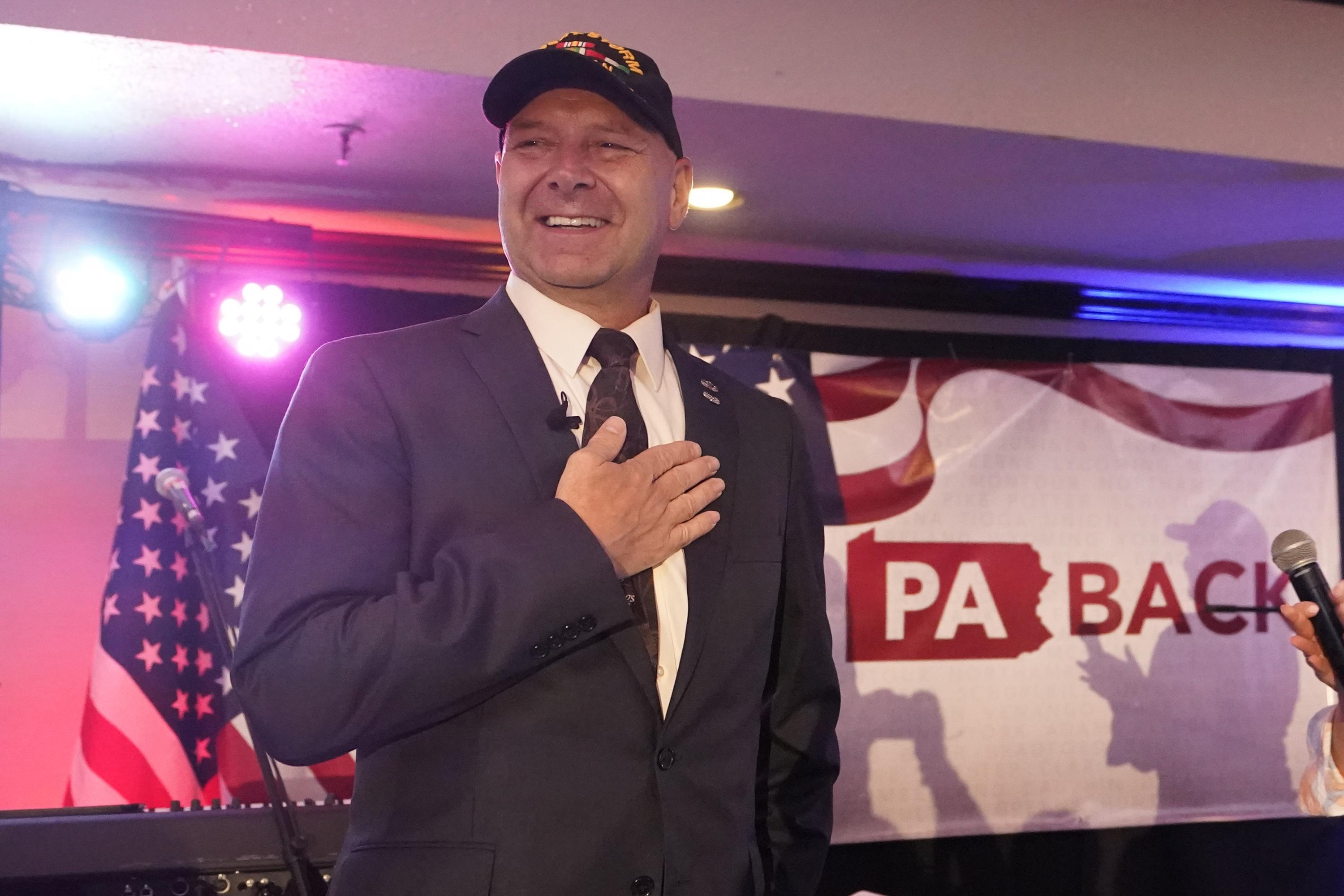 PITTSBURGH (AP) — The victory party took on the guise of an evangelical worship service after Doug Mastriano won Pennsylvania’s Republican gubernatorial primary this month. As a Christian singer led the crowd in song, some raised their arms in praise.

Mastriano began his remarks by referring to Scripture: “God uses fools to confound the wise.” He claimed the freedom of Pennsylvanians would be “snatched away” if his Democratic opponent won in November, and framed the election in purely religious terms with another biblical reference: “Let us choose this day to serve the Lord.

Mastriano, a retired state senator and army colonel, not only placed faith at the center of his personal story, but weaved conservative Christian beliefs and symbols into the campaign – becoming the most prominent example of this election cycle of what some observers call a rise in Christian nationalism. among Republican candidates.

Mastriano — who ignored repeated requests for comment from The Associated Press, including during his campaign last week — has rejected the label of “Christian nationalist” in the past. In fact, few if any prominent candidates use the label. Some say it is pejorative and insist that everyone has the right to draw on their faith and values ​​to try to influence public policy.

But scholars generally define Christian nationalism as going beyond political debates and championing a fusion of American and Christian values, symbols, and identity.

Christian nationalism, they say, is often accompanied by the belief that God has destined America, like biblical Israel, for a special role in history, and that it will receive divine blessing or judgment in according to his obedience.

This often overlaps with the conservative Christian political agenda, including opposition to abortion, same-sex marriage and transgender rights. Researchers say that Christian nationalism is often also associated with distrust of immigrants and Muslims. Many Christian nationalists see former President Donald Trump as a champion despite his crude sexual boasting and lack of public piety.

Candidates seen as Christian nationalists have had mixed success in this year’s Republican primaries, which have generally pitted staunch conservatives against even more right-wing opponents.

There have been losses of some high-profile candidates, such as U.S. Representative Madison Cawthorn and Idaho gubernatorial hopeful, Lt. Gov. Janice McGeachin. The former spoke of a “spiritual battle” on Capitol Hill and a need for “strong, God-fearing patriots.” The latter was photographed holding a gun and a Bible and said, “God is calling us to take up the sword and fight, and Christ will reign in the state of Idaho.”

Some of Idaho’s Republican primaries for the Legislative Assembly have been won by candidates touting Christian values ​​or sharing priorities with Christian nationalists, such as banning sports for transgender athletes. U.S. Rep. Marjorie Taylor Greene, R-Ga., who uses the biblical phrasing for “being a watchman on the wall” against those who seek to “destroy our faith,” easily won her primary.

Christian nationalism watchers consider Mastriaono’s victory — in a rout, with 44% in a crowded field despite opposition from the state party establishment — by far the movement’s most high-profile victory.

Mastriano called the separation of church and state a “myth”.

“Praise Jesus!” “God smiles at us and sends us his blessings.” “Thank you Father God!!”

Mastriano “is a unique case where he really highlights in his speeches this apocalyptic idea” where his supporters and his causes are on God’s side, said Andrew Whitehead, professor of sociology at Indiana University-Purdue at Indianapolis and co-author of “Taking America Back”. for God: Christian Nationalism in the United States.

“It’s literally good and bad,” he continued. “There is no room for compromise, so this is the threat to democracy.”

In the book, Whitehead and co-author Samuel Perry measured rates of Christian nationalism based on a 2017 survey from Baylor University. He weighed opinions on things like America’s role in God’s plan and whether the United States should be declared a Christian nation, advance biblical values ​​and allow school prayer and protests. nuns in public places.

Their research found that about one in five Americans shared many of these views. That’s down from nearly one in four a decade earlier, just as Americans have become less religious overall. But Whitehead said Christian nationalists, who outnumber Republicans, can expect to maintain their fervor.

Christian nationalism is emerging alongside and in some cases overlapping with other right-wing movements, such as the QAnon conspiracy, white supremacy and denial over COVID-19 and the 2020 election. Christian prayers and symbols featured prominently in and around the United States Capitol during the January 6, 2021, uprising.

Mastriano, who sought to overturn Pennsylvania’s vote for Joe Biden in 2020, attended the rally ahead of the attack and chartered buses to bring others. Although he says he left when things got violent, video showed he walked through “barricades and broken police lines”, according to a Senate Judiciary Committee report.

Robert Jones, CEO of the Public Religion Research Institute, said these January 6 postings were not surprising.

According to a recent institute survey, white evangelical Christians were among the strongest supporters of the claim that God intended America to be a “promised land” for European Christians. Those who supported this idea were far more likely to agree that “true American patriots may have to resort to violence…to save our country.”

“In my opinion, white Christian nationalism is really the threat,” Jones said.

Conservative Christian themes also play a part in local elections, including in blue states, although many supporters say they don’t see it as nationalism but as support for their freedom and religious values.

Pastor Tim Thompson of Church 412 in Murrieta, Calif., which hosts a YouTube channel with more than 9,600 subscribers and envisions a conservative future for the state, recently created a political action committee aimed at “taking back our school boards” and to give parents authority over the school curriculum. .

Judeo-Christian values ​​are the foundation of America, he argued.

“People are afraid to stand up for those values ​​because they’re afraid the left will label them as ‘racist’ or ‘Christian nationalist,'” Thompson said. “I don’t care about those labels, because my wife, my kids, my church and my community know who I am.”

Pastor Jack Hibbs of Calvary Chapel Chino Hills in Chino Hills, Calif., also sought to influence local elections. While he doesn’t let candidates campaign in the church, he frequently offers endorsements as a way to signal to his flock those who are “pro-family, pro-life and pro-freedom.”

But “the hair on my neck stands on end” when he hears the term “Christian nationalism,” he said. And he was embarrassed to see Christian images during the January 6 riot: “It was a sad day, to see these sacred symbols and these pimping words like that.”

Still, although he thinks the Founders created a secular nation, Hibbs said every Christian should have a say.

Elizabeth Neumann, chief strategy officer of Moonshot, a technology company that aims to combat online violent extremism, misinformation and other wrongdoings, said Christian nationalism began to gain momentum around 2015 in amid a growing narrative of alleged persecution of Christians.

Neumann, who served in the George W. Bush and Trump administrations and grew up in an evangelical Christian family, called the movement “heretical and idolatrous” and an “apocalyptic vision (which) very often leads to violence.” “. Many pastors oppose it, she added.

“I see Christian nationalism as the gasping, dying breath of the older generation in America who are afraid that Christians will be replaced,” she said.

Is the Mainstream Media Biased Against Catholic Supreme Court Justices?