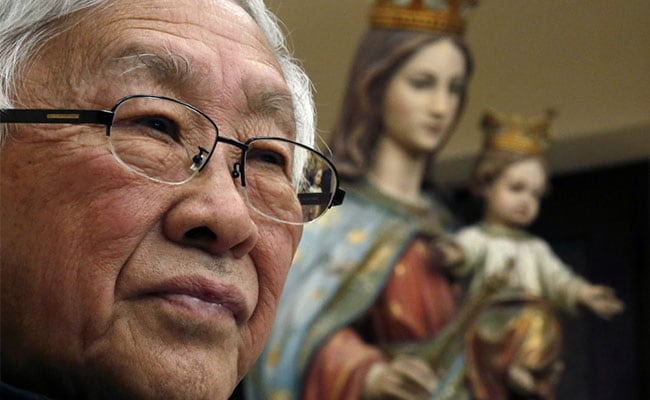 More than 180 Hong Kongers have been arrested under the national security law so far. (Case)

China on Thursday defended the arrest of a 90-year-old Catholic cardinal under Hong Kong’s national security law, a move that sparked international outrage and deepened concerns over Beijing’s crackdown on freedoms in the financial center.

Retired Cardinal Joseph Zen, one of Asia’s top Catholic clerics, was among a group of democracy veterans arrested on Wednesday for “colluding with foreign forces”.

“The persons involved are suspected of conspiracy to collude with foreign countries or foreign forces to endanger national security, an act of a serious nature,” said the commissioner’s office, which represents the Ministry of Foreign Affairs of Beijing to Hong Kong.

The four were arrested for their involvement in a now-disbanded defense fund that helped pay the legal and medical bills of those arrested during the huge and sometimes violent wave of anti-democracy protests three years ago.

China has responded with a massive campaign to crush the movement and transform the once-free city into something more like the authoritarian mainland.

Zen and his colleagues, who were released on bail on Wednesday evening, join more than 180 Hong Kongers arrested so far under the national security law imposed by Beijing to stop protests.

Defendants are usually denied bail and can be sentenced to life in prison if found guilty.

Criticism has come from Western nations who have accused China of eviscerating the freedoms it once promised Hong Kong.

The United States, which has previously sanctioned key Chinese officials for the ongoing crackdown, called on Beijing to “stop targeting Hong Kong defenders”.

The Vatican said it was concerned about Zen’s arrest and “was following developments very closely.”

Cardinal Zen fled Shanghai for Hong Kong after the Communists took over China in 1949 and became the city’s bishop.

A longtime advocate of Hong Kong’s democracy movement, he accused the Vatican of “selling out” China’s underground Catholic Church by reaching a compromise with Beijing over the appointment of bishops on the mainland.

Hong Kong’s Catholic hierarchy, including successors to Zen, have become much less outspoken about Beijing in recent years.

The Hong Kong diocese said on Thursday it was “extremely concerned about the condition and safety of Cardinal Joseph Zen”.

“We hope that in the future we will continue to enjoy religious freedom in Hong Kong under the Basic Law,” he said in a statement, referring to the city’s mini-constitution which is supposed to guarantee essential freedoms.

“It has become apparent that there is a sword of Damocles above Zen and other members of the church.”

On Thursday, a church visitor who gave her name to Laura said worshipers feared the mainland-style suppression of religion was coming to Hong Kong.

“The space for religious freedom has apparently shrunk because even a Catholic cardinal is now under arrest,” she said.

Among other things, they funded lobbying trips and activist meetings with British lawmakers, provided financial aid to Hong Kong “rioters” who had fled to Canada and Taiwan, and accepted donations from abroad and from the newspaper. Apple Daily, now closed.

But most of the alleged actions cited by Ta Kung Pao took place before the enactment of the law, which is not meant to be retroactive.

The fund was dissolved last year after the National Security Police demanded that it hand over operational details, including information about its donors and beneficiaries.

(Except for the title, this story has not been edited by NDTV staff and is published from a syndicated feed.)