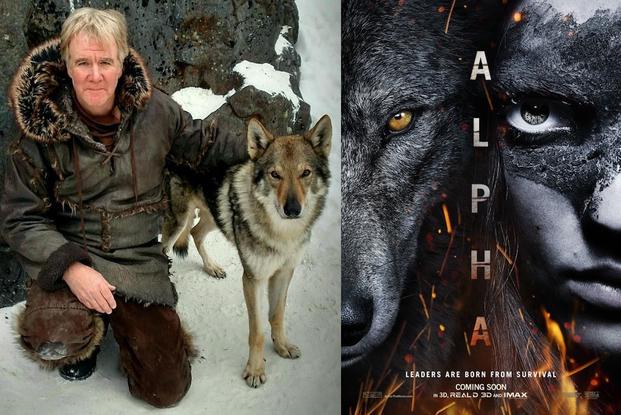 
“alpha“(now out on Blu-ray, DVD and digital) is a total surprise: a family-friendly, really exciting film with dogs that play wolves. Director Albert Hughes works solo without his long-time partner and brother Allen (” The Book of Eli, “” Dead Presidents “), moves away from the dark urban drama for which he is known and makes a spectacular Ice Age film set in bleak and beautiful surroundings.

The human characters in the film speak an unrecognizable ancient (and imaginary) language, but you could easily see the entire story if you chose to see the subtitles turned off. Young Keda (Kodi Smit-McPhee) is separated from his tribe during a hunt and finds a way to survive when he encounters an injured wolf that has been separated from its own pack. The boy and the wolf bond when Keda tries to find his people again.

Mark Forbes is a veteran animal trainer with dozens of films. He plays an important role in “Alpha” because the dog’s accomplishments as wolves are critical to the success of the story. Mark took the time to talk to us about the film and share some information about his career.

You have worked with animals in many films, but “Alpha” seems different from anything you have ever worked on.

What attracted me to this film is the story within the story, which you don’t even know that it may be the story until the end of the film that marks the beginning of the domestication of wolves in human civilization. When I read the script, I had no idea what the film was about until the last page.

Obviously, the biggest challenge a wolf had to have with an actor during the last three quarters of the film was the relationship. We went through a lot of different ideas: are we using a real wolf? Are we going to use a dog that looks like a wolf? We looked at hybrids across North America. Most of your hybrids here in North America are usually Husky / Wolf or Malamute / Wolf crossbreeds.

Our director, Albert Hughes, lives in Prague in the Czech Republic. He told me about the Czech wolfhound breed that was an experiment by the Czechoslovak military in the 1950s. They wanted a dog, a military dog, and they thought that breeding wolves with German Shepherds would give them a military dog. I don’t think it worked out that well for them.

But the breed has actually caught on in Europe. It is now a recognized breed in Europe. There aren’t many of them, but there are a few. The people who have them when they show the dog put them in the car, they drive them to the show, they get socialized. It was just a very different animal from the hybrid you usually see in North America that just lives in someone’s back yard.

The Czechoslovak Wolfhound has given us so many more opportunities to work with an actor. He still has wolf tendencies, but is much easier to work with than it would have been with a full wolf.

I never would have thought that the breed was a German Shepherd. The dog looks like a wolf in the film.

He’s definitely very wolf-like, even after a Czechoslovakian wolfhound. After looking at so many different types of hybrids, I find that the German Shepherd-Wolf Cross looks a lot more wolf-like than the Malamute in particular, but even the Husky as the body type is definitely more wolf-like than some of your North American hybrid looks are.

What gives it away is the face, the eyes. The wolf eyes are very crescent-shaped. They have a larger ruff and a slightly longer snout. And I think they gave us a bit of CGI help with Chuck, especially at the beginning of the movie where he’s supposed to be wilder and more antagonistic to Kodi’s character. As the movie progressed, they did so a little less and less as the wolf’s character softened towards him. His gaze also softens, so that at the end of the film you can see the real Chuck, so to speak.

You are working with a domesticated animal, but it looks like the filming was not done in the simplest of conditions. Maybe some of the environment is CGI, but a lot looks like it was shot out in harsh conditions in the wild.

It was both. For some of these scenes we shot in a parking lot in front of a blue screen and then drove to Alberta and shot in the rough terrain you see. To be honest, for Chuck and the wolfhounds we worked with, it was easier for us to train in these conditions than on a stage. They liked being outside, they liked the openness, they liked being able to see for miles. When locked on a stage, they are much more careful and look at everything around them. The sounds reverberate and everything is right above them instead of being in the open air. Although the locations were very tough for the rest of the crew, they actually made it a little easier for us. It also made it easier for Chuck to portray this character in those locations. He definitely looks more wolf-like on a cliff than in the parking lot in front of a blue screen.

There are a lot of wolves in the movie. How many of these are CGI and how many are dogs?

We had six other Czechoslovakian wolfhounds that we use as a kind of pack that Chuck was a part of and that we then returned to for a short time in the film. We actually had a pack that all trained and learned to achieve their goals and work together. It was definitely a group performance.

I recently read Jack London’s “White Fang” and the movie really reminded me of that story, even though the book is 100 percent a story told from the wolf’s perspective. It’s a great story about how wolves became domesticated and turned into dogs. Why do you think wolves and humans developed this connection?

Wolves are such a pack animal. They want to belong to a pack, they thrive in a pack. You are a top predator, not because one of them is the top predator; It is the pack that is a top predator. Together they can hunt almost anything. The same applies to the African wild dogs in Africa; It’s the teamwork of the group that makes it so efficient and deadly. There is a pact between animals; but it’s not a lonely creature that kills just to get dinner. You really have to figure out how to work together to eat. It’s all about the group.

There are other pack animals, but there is something about the wolf that fits easily into our human world. Since we’ve worked with many different animals, there is no other animal that wants our approval as badly as the treat during training. With many other animals, it’s all about the treat.

In the dog, tapping on the head becomes almost as important as the treat. And it goes back to that pack where dogs decide they should do this together, they all get along or quarrel and find out where their place is in the pack. But it’s about the pack, after all, it’s about everyone getting along and working and living together, which of course is also very human. There is just something about wolves and dogs that really lend themselves to this type of human lifestyle.

Obviously there are many people who serve in the military who are engaged in military dogs and training. If someone gets out of the service and is interested in getting your job, do you have any insight into how to do that?

Secure. I kind of fell into it. I attended an exotic animal training and management program at Moorpark College, a small community college outside of Los Angeles. I graduated from high school, went to Southern Oregon State for a year and didn’t know what to do with my life. I heard about this program and always wanted to do something with animals for a living, but I didn’t really know what. So I applied for this program and was accepted.

It was really broad. It was everything from caring for the animals to pre-screening to working with marine mammals, the whole gamut, so to speak. It was a two year program that didn’t specialize in anything, it hit everything.

When I graduated, I saw a little hint on the bulletin board from a trainer named Ray Berwick. We had read his training book in one of our classes and he was the old Hollywood trainer who made Alfred Hitchcock’s “The Birds” and a bird on a TV show called “Baretta”. Ray was organizing a dog show at Knott’s Berry Farm. I applied and was accepted. I didn’t do that for long. I started doing the dolphin and sea lion show very quickly. That led to the Animal Actors Live show being played at Universal Studios. From then on, I just remembered what I’m doing today, which is working with animals in movies and on television.

All that can be said is that I just fell for this job. I love it. Whether you’re volunteering with a trainer or a company that does this, or going to school at the moor park, just find a way to get your foot in the door and then make the most of it. I think everyone in this industry has done that before.

You have to find out if you really love it or not because, as an old film trainer told me, there are two days of glamor in this business: the day you get the job and the day the film comes out. All of the rest is just really hard work.

You really have to love what you do. There are no days off, you take care of animals all the time, you collect a lot of feces, but you can spend your day working with animals. Which, if you love it, is definitely the reward in itself.

Is your business based entirely in California, or are there animal trainer opportunities elsewhere where they make movies and television these days?

There is. I would say the largest center outside of Los Angeles right now is Atlanta. I’m in Savannah, Georgia right now, working on a project. There is a huge film production going on in Georgia, definitely in the Atlanta area. Vancouver is another big one. England is jumping right now. They have a huge tax incentive and a lot of things filmed in Europe have their origins in London and England.

New Mexico shoots quite a bit. There’s New York, there’s Michigan, there’s Louisiana. They have incentives and there are quite a few crews in those areas too. But the big ones are Los Angeles, Atlanta, Vancouver, London. And then, to a lesser extent, New Mexico. There are animal businesses in each of these locations, so you certainly don’t have to be based in Los Angeles.

Thank you for talking to us about “Alpha”. It really is a surprising film.

Yes, it’s surprising that it was made at all. It was such a pure idea and it was all Albert, it was the director. He pushed for it and fought to keep it from being watered down. I appreciate the effort, because you don’t see such films very often.

© Copyright 2021 Military.com. All rights reserved. This material may not be published, broadcast, rewritten, or redistributed.