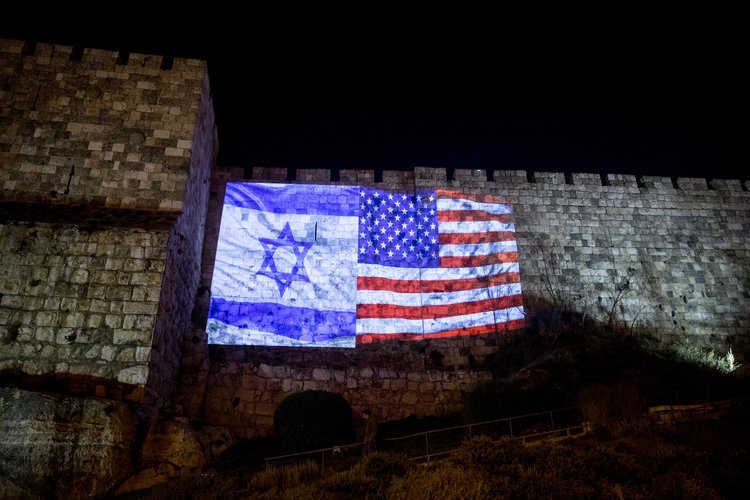 (April 20, 2022 / JNS) The following is an abridged version of the Distinguished Rennert Lecture, delivered on April 19 by Ambassador David Friedman after receiving the Guardian of Zion Award from the Ingeborg Rennert Center for Jerusalem Studies at Bar-Ilan University.

One of the most common forms of anti-Semitism in America is the charge that Jews have dual loyalties, that they support Israel more than America. In my four years as Ambassador to Israel, I have been victimized by this terrible canard more than a few times – oddly enough, often by groups of American Jews.

It’s shameful and it’s absurd. Not only does support for Israel by American Jews compromise or undermine support for our host country, but support for Israel is in fact a quintessential American value. Indeed, the Bible, much of which is based on God’s covenant with our ancestors to settle, and later restore, the Jewish people to the land of Israel, is the basis of the principles upon which the America was founded.

While America, unlike many other countries, has no national religion or place of worship, make no mistake about it, the values ​​of the Bible run deep in our fundamental roots. And it is the God-given nature of these values ​​that makes them unique and makes America so great.

The Bible is God’s gift to mankind—the formula for living righteous, fulfilling, and meaningful lives. In many ways – certainly mine – it is the most important written work of all time.

Well, we can debate that, but here’s my suggestion: the United States Declaration of Independence. This brilliant document fundamentally changed the way we think about the relationship between a government and its citizens.

The Declaration of Independence provided that every human being was created equal and endowed by his creator – remember these words – with certain inalienable rights, including life, liberty and the pursuit of happiness.

The idea that basic human rights came from God and not from man was a revolutionary concept. It made those rights permanent, undeniable, non-negotiable and immune to the vagaries of politics.

How did our founding fathers know which rights God considered inalienable? Our founders knew this because they all read the Bible. There is no doubt that the American Republic was carved from the lessons of the Bible.

As we sit here tonight in Jerusalem, about a mile from the ancient City of David, we cannot help but see not only the biblical roots of America, but also the geographical roots. Not only were our founders heavily influenced by the Bible, but we also know where that influence came from.

Indeed, the prophet Isaiah, recognized as a prophet in the three great monotheistic religions, proclaims: “From Zion will come the law and the word of the Lord of Jerusalem”. (Ki mitzion tetze Torah u’dvar hashem m’yerushalayim.)

Thus, not only philosophically, but also geographically, it is irrefutable that our great American Republic has its roots in Jerusalem; let’s never forget that. To understand this connection between the birth of America and the values ​​that emerged from the city of Jerusalem is to understand all that has happened since:

It’s about understanding why pilgrims risked their lives in the 17th century to reach a new world and establish what many called a “New Jerusalem.”

It’s about understanding how 13 American colonies, all hugging the East Coast, somehow expanded for thousands of miles in every direction under the doctrine of “manifest destiny” – a doctrine affirming divine right and America’s destiny to inhabit the earth from coast to coast. . Our American founders took to heart God’s words to Jacob as he slept in Bet El and dreamed of a ladder rising to heaven: Ufaratzta yama vakedma, tzaphona vanegba—“You shall spring west and east, north and south.”

Understanding America’s biblical heritage also means understanding why the United States opened a consulate in Jerusalem in 1844, 104 years before the establishment of the State of Israel, when the new consul general was planted an American flag at Jaffa Gate and declared that the United States of America “hereby extends its protection to the Jews of Jerusalem”.

It’s also to understand why almost every state in the union has towns and villages named after towns and villages in Biblical Israel, from Bethlehem to Shilo to Bethel to Hebron to Jericho to Nazareth to Zion and even in Jerusalem.

It’s also understanding why President Harry Truman made the United States the first nation to recognize the resurgent State of Israel in 1948.

It is also about understanding why, in 1995, the United States Senate and the United States House of Representatives, by overwhelming majorities, passed the Jerusalem Embassy Act recognizing Jerusalem as the undivided capital of Israel and ordering the transfer of our embassy to that city.

It’s also to understand why every president since Bill Clinton has promised to move our embassy to Jerusalem, or at least maintain its character as the undivided capital of Israel, although I apologize if I specify that only one has held his promise.

And, finally, it is also to understand why, today, the United States Embassy stands proudly in the undivided city of Jerusalem, the eternal capital of the Jewish State.

Indeed, just before leaving office, together with Chairman Paul Packer of the Presidential Commission for the Preservation of American Heritage Abroad, I officially recognized the City of David in Jerusalem, the place where the biblical kings ruled and where the prophets preached, as an American heritage site.

America’s physical beginnings can be traced to Plymouth Rock, Valley Forge, the Continental Congress, the Constitutional Convention, the Fourth of July, or other significant historical landmarks. But America’s spiritual beginning, its fundamental fundamentals, its understanding of the God-given rights of every human being, that spiritual beginning occurred with, in the words of Isaiah, “The word of the Lord proceeding out of Jerusalem “.

Many of us today look upon our capital in Washington, DC with such confusion, bewilderment and disappointment. Who are we as Americans? What have we become? What are we standing for?

Where we used to feel such pride and confidence, we now find ourselves with uncertainty and even emptiness.

My friends, the answer to this existential crisis in America is not to become a Republican and it is not to become a Democrat. The answer is to return to the Judeo-Christian values ​​upon which America was forged—to restore our fundamental commitment to life, liberty, and the pursuit of happiness; renewing our relationship with our Creator and the eternal principles for a useful and meaningful life given to us in the holy Torah.

As we become more and more detached from our values, we become weaker as a nation.

Moses saw this problem 3,500 years ago and warned us about it in Deuteronomy 12:8: “You must not do as we do here today, each one doing what seems good to him. »

What an apt description of modern times – each doing what seems right to them –Ish kol hayashar b’einav.

We are a blessed nation because we are a nation of laws and a nation of values. We weren’t created as a nation of freelancers chasing the latest fad or half-baked theory, all driven to self-validate our poorer picks. Our nation was founded on the principles of personal responsibility, equality, opportunity, generosity and responsibility – all lessons that emerged from the kings, priests and prophets of Jerusalem.

To my friends here in Israel: You must understand the extraordinary responsibility you bear now, since 1967, as guardians of Jerusalem. Like no other nation or army that preceded it, Israel made Jerusalem a beautiful city worthy of its divine status.

It is open and accessible to people of all faiths and even to people without faith, despite the false accounts proffered by the enemies of Israel. You in Israel are to be commended for your unprecedented care and maintenance of Jerusalem, aided by extraordinary benefactors – Ira and Ingeborg Rennert at the very top of the list.

Israel has earned the right to be responsible for Jerusalem and it must never give up that right. And Israel must never divide Jerusalem; it is the will not only of the Jewish people, but of millions of others around the world, and it is even the law of the United States. For so many around the world, Jerusalem is our North Star.

I challenge all Israelis and all Americans to become “Guardians of Zion”, to defend Zion, Jerusalem, as the eternal and undivided capital of the Jewish State, and as the source of all that we hold sacred and which deserves to be preserved. In doing so, we will stand up for everything that makes America and Israel the two greatest nations on earth and the last and best hope for our collective humanity.