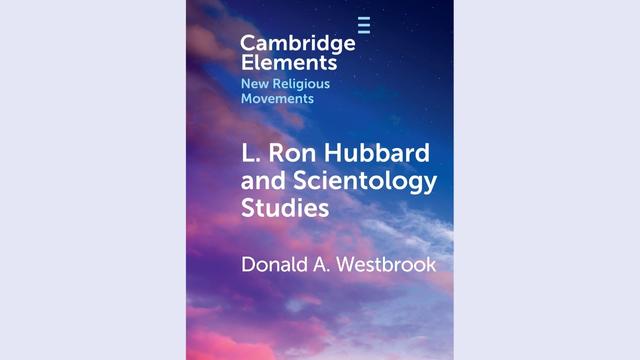 The book in the Cambridge Elements series may one day be remembered as the first “Scientology Studies 2.0” textbook.

Cambridge Elements was launched by Cambridge University Press in 2019 as an ambitious new concept in scholarly publishing. The idea was to ask leading academics in a wide variety of fields to write a short, peer-reviewed guide to the subject they specialize in, hoping it will become a key reference for students in coming years.

Donald Westbrook had already published in 2018 an important book on Scientology at Oxford University Press entitled “Among Scientologists: History, Theology and Praxis”. Rather than the famous members of the Church of Scientology who are often mentioned in the media, this book has focused on “ordinary Scientologists,” who remain largely invisible but support the daily activities and growth of the Church. “Ordinary Scientologists” should be less controversial than celebrities, but Westbrook’s 2018 work had to take into account the opposition in some quarters to any attempt to study Scientology in a non-hostile way. In fact, anti-cult opponents of Scientology were quick to express their dislike of the book.

Westbrook had repeatedly expressed the view that it was high time to move into a phase of “Scientology Studies 2.0”, a phrase I myself coined in 2017, meaning a study of the Church of Scientology and its founder, L. Ron Hubbard who, while not ignoring the controversies, would not make them the primary focus of research and would explore Scientology and Hubbard as one would with n any other religion and its founders.

With the Cambridge Elements “L. Ron Hubbard and Scientology Studies” (2022), Westbrook goes even further. His book is not a biography of Hubbard, nor a synthesis of his religious ideas, but a manual teaching researchers and students how Scientology should be studied.

In the first section, Westbrook reviews the history of Scientology studies. He mentions problems and misunderstandings in the early years of the academic study of Scientology, but he warns that comments based on incidents between the Church of Scientology and certain scholars forty or fifty years ago do not describe with clarify the current situation. Although the Church considers certain documents confidential, as do many other religions, it is willing to cooperate with bona fide scholars. Westbrook describes his own experience, which has been positive and not unlike what scholars encounter when doing fieldwork on other religions.

Westbrook also mentions that valuable studies on Scientology have been produced, such as the books by J. Gordon Melton and Aldo Natale Terrin and several articles, among which he lists those published in “The Journal of CESNUR”, a scientific journal to which I am attached. the editor. Other studies were influenced by anti-cultists and apostate ex-members, but still provided the opportunity for scholarly discussion of important aspects of Scientology.

In the second section, Westbrook describes how Hubbard is viewed by Scientologists today, including a generation who had not met him personally or weren’t even born when Scientology’s founder died in 1986. While one may have the superficial expression that Hubbard was “deified” after his death, Westbrook explains that for Scientologists he is “no more divine than all Scientologists can become” using the “technology” “which he designed, codified and refined during his lifetime”. Hubbard saw himself as “an explorer and engineer of the mind and spirit”, and that is how Scientologists continue to view him. They tend not to use words like “belief” or “faith” when describing their relationship to Hubbard’s teachings, Westbrook notes. They prefer “terms such as knowledge, technology, and maneuverability,” indicating that becoming a Scientologist is not about faith but about gaining experiential knowledge that Hubbard’s spiritual technology works.

In the third part of the book, Westbrook takes us on a fascinating pilgrimage to the sites where Hubbard developed his technology and others that are crucial to the history of Scientology. The word “pilgrimage” here is not only metaphorical. Like other religions, Scientology has devoted considerable resources to preserving, restoring and opening to the public the places where Hubbard lived, worked and developed Dianetics and Scientology. Scientologists, as well as non-Scientologists, can learn many details about Hubbard and the Church by visiting these places, which become something of a “holy place” and “shrine” for Hubbard’s followers.

The fourth section lists a number of libraries and archives that hold significant collections on L. Ron Hubbard and Scientology. The list is not restricted to scholars and dispels the myth that Scientology cannot be studied for lack of primary documents, such that one is reduced to relying on hostile accounts from apostate former members. In fact, while Westbrook hopes that one day Scientology will grant wider access to its own archives, he explains that researchers willing to do their homework have thousands of primary documents to work on.

It is therefore, as Westbrook explains in the fifth concluding part, not the lack of sources but the prejudices and malicious pressures of opponents that sometimes prevent scholars from studying Scientology. However, “Scientology Studies 2.0” has now emerged (in fact, also thanks to Westbrook himself), as well as promising sub-areas for research, such as the adaptation of Scientology to non-American contexts, its influence on the arts and its “social commitment and humanitarian action”, on which the author mentions the pioneering studies of the French researcher Bernadette Rigal-Cellard. The volume is completed by a glossary, a chronology and a bibliography.

Cambridge Elements is short in nature. They do not offer an encyclopedic view of their subject, but indicate how it should be studied. Once the goal is understood, one can only conclude that Westbrook succeeds admirably. In the future, it would be difficult to seriously study Scientology without taking into account the methodological indications of this text and without committing oneself to it. Westbrook’s Element may one day be remembered as the first true book written in the “Scientology Studies 2.0” style. It proves that “Scientology Studies 2.0” is an idea whose time has come.