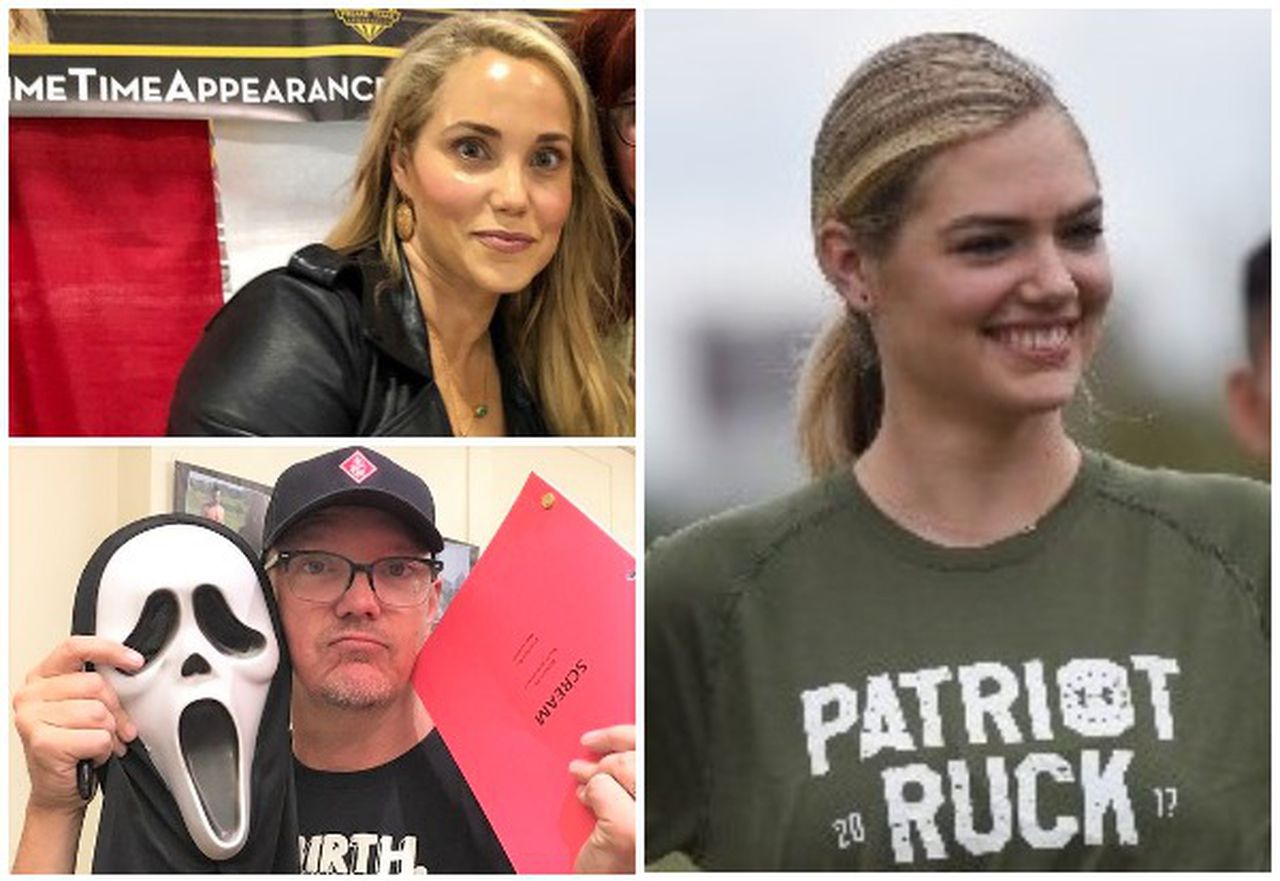 Some of your favorite television and movie stars are from Michigan and chances are, you never realized it. We’re sure you know the most famous ones like Madonna, Kristen Bell, Kid Rock and others. But there are dozens of other famous faces from this state who we’re betting may surprise you.

Here is a list we compiled of 30 celebrities who were born in Michigan you may not have known were from the Great Lakes State. Of course, there are many other famous faces besides these. But for now, see how many you didn’t know about.

The actor and comedian was born in Birmingham in Metro Detroit before his family moved to Arizona when he was four years old. The “Saturday Night Live” alumni is best known for his sitcoms “Just Shoot Me” and “Rules of Engagement.” You also know him from his many big screen comedies like “Joe Dirt,” “Tommy Boy,” “Black Sheep” and “Grown Ups.”

This actor and comedian was born in Detroit in 1969 and raised in North Carolina. He is best known for starring on the TV shows “Community” and “Dr. Ken.” Currently, you can see him as a judge on the hit FOX singing show “The Masked Singer.” You also know Jeong from “The Hangover” series of movies along with “Ride Along 2″ and “Crazy Rich Asians.”

This famous filmmaker was born in Lansing in 1950 and grew up in Grosse Pointe in Metro Detroit before his family moved to Chicago when he was in 7th grade. Hughes is known for writing, producing or directing some of the biggest comedy films of the 80s and 90s including “National Lampoon’s Vacation,” “Sixteen Candles,” “Weird Science,” “The Breakfast Club,” “Ferris Bueller’s Day Off,” “Pretty in Pink,” “Planes, Trains and Automobiles” and “Home Alone.” Hughes passed away in 2009.

This actor was born in Detroit in 1960. He went to Detroit Country Day School and graduated college from Harvard. You know him from such movies as “Hamburger Hill,” “The Hunt for Red October,” and his newest film, “Project Power” on Netflix. On the small screen, he’s known for “Law & Order: Criminal Intent” and “The People v. O.J. Simpson: American Crime Story.”

This actress and comedian was born in Detroit in 1971 and raised in Trenton in Metro Detroit. You may know her as “Chloe” on “24.” She also travels the country performing stand-up comedy.

This actor and comedian was born in Detroit in 1956. He attended Cass Tech High before graduating from the University of Michigan. You may remember him from the TV comedy sketch show “In Living Color,” He’s also appeared and starred in numerous TV shows and movies like “Amazon Women on The Moon,” “Boomerang,” “Jumanji,” “Coffee and Kareem” and “The Cool Kids.”

This actor and stuntman was born in Sturgis in 1969. He passed away in 2018. He is a graduate of Centreville High School. You know Troyer from the “Austin Powers” film series.

This WCW and WWE legend was born in Detroit in 1955. Bischoff led World Championship Wrestling as its Executive Vice President in the 90s during the famous ratings wars with WWE. He also served as WWE RAW General Manager in the early 2000s.

Born in Detroit in 1943, this film and TV producer graduated from Mumford High before moving to Arizona to attend college. Some of his best-known movies include “Top Gun,” “Beverly Hills Cop,” “Pirates of the Caribbean,” “Flashdance,” “Con Air,” “Armageddon,” “Black Hawk Down” and “Bad Boys.”

This model and actress was born in Monroe in 1954. Her family later moved to Los Angeles. Brinkley is known for being on the cover of numerous Sports Illustrated swimsuit issues. She also spent more than two decades as the face of CoverGirl. Her first acting role was in the the 1983 film “National Lampoon’s Vacation” as the woman in the red Ferrari.”

This award winning actor was born in Grosse Pointe in 1955. His family moved to Ohio when he was 10. You know Simmons from his roles on “Law and Order,” “Oz,” “Spider-Man” and in “Whiplash” where he won the Oscar for Best Supporting Actor.

This actor was born in Lansing in 1970, but grew up in California. You know him from “Scream,” the live action “Scooby-Doo” series of movies and “Good Girls.”

This action star was born in Lansing in 1952. His family moved to California when he was five. You know Seagal from such action films as “Under Siege,” “Executive Decision” and “The Patriot.”

This actor was born in Detroit in 1939. He passed away in 2014. You know him from his roles as Jaws in the “James Bond” movie franchise. You also know him from “The Longest Yard,” “Happy Gilmore” and Cannonball Run 2.”

This actor was born in Grand Rapids in 1992. He grew up in nearby Hudsonville. He’s best known for playing Jacob in the “Twilight” series of movies. He also starred in the BBC sitcom “Cuckoo” and in “Scream Queens.”

The “Smokey and The Bandit” actor was born in Lansing in 1936. He grew up in Lake City in Northern Michigan. Reynolds passed away in 2018. You also know him from his roles in “Deliverance,” “The Longest Yard,” “Cannonball Run” and “Evening Shade.”

This actress was born in Southfield in 1972. She attended Hillel Day School in Farmington Hills before attending Cranbrook. She went to Kalamazoo College before moving to New York City. You know her from such hit films as “Cruel Intentions,” “Legally Blonde,” “The Sweetest Thing” and “Hellboy.” In recent years, she has been open about her battle with multiple sclerosis.

Winner of 15 major world boxing titles, Mayweather Jr. was born in Grand Rapids in 1977. His family moved to New Jersey in the 80s. Boxing Writers Association of America named him the “Fighter of the Decade” for the 2010s. In 2016, ESPN ranked him as the greatest boxer of the last 25 years, pound for pound. The retired boxer finished with an undefeated 49-0 record.

This model and actress was born in St. Joseph in 1992. Her family moved to Florida seven years later. Upton was the cover model for the Sports Illustrated Swimsuit issue three times in 2012, 2013 and 2017. She also starred in the films “Tower Heist,” “The Other Woman” and “The Layover.” She’s married to former Detroit Tigers pitcher Justin Verlander. The couple has one daughter.

This actor, director and writer was born in Mt. Clemens in 1962. He graduated from Chippewa Valley High School in Clinton Twp. Feig starred as Mr. Pool in “Sabrina, The Teenage Witch.” He directed “Freaks and Geeks,” several episodes of “The Office” and “Arrested Development.” He also directed the movie “Bridesmaids” among other films including the recent “Ghostbusters” reboot.

“The Ladies Man” was born in Highland Park in 1961. Meadows graduated from Pershing High in Detroit and attended Wayne State University. You know the “Saturday Night Live” alumni from “Grown Ups,” “Schooled,” “The Goldbergs,” “Mean Girls” and a lot more movies and TV shows.

“The Man of Steel” was born in Mt. Clemens in 1966. Cain’s family moved to California when he was young. The actor, who has been in dozens of movies and TV shows, is known for playing Superman in TV’s “Lois and Clark: The New Adventures of Superman.” Cain graduated from Princeton. The NFL’s Buffalo Bills signed him out of college, but a knee injury ended his career.

This actor and comedian was born in Southfield in 1971. He graduated from the University of Detroit Mercy in 1993. You know him from his hit sketch series “Key & Peele.” You also know Key from “Pitch Perfect 2,” “Toy Story 4,” “The Lion King” live action film, “Friends From College” and most recently as host of “Game On!”

“The Six Million Dollar Man” was born in Wyandotte in 1939. Along with his starring role as Colonel Steve Austin, you know Majors from “The Fall Guy” and “The Big Valley.”

The “America’s Got Talent” host was born in Flint in 1968. He graduated high school from Flint Southwestern Academy before attending Interlochen. He also attended Western Michigan University where he excelled at football before being drafted by the Rams. You know Crews from “White Chicks,” “Blended,” “The Expendables” and “Brooklyn Nine-Nine.”

This actor and comedian was born in Detroit in 1923. He passed away in 2009. He was Johnny Carson’s sidekick for 30 years. You also know him as the host of “Star Search” and co-host of “TV’s Bloopers & Practical Jokes.”

This singer and actor was born in Detroit in 1935. His family moved to California when he was seven. He’s most famous for his duet with wife Cher, “I Got You Babe.” The two also shared the stage on “The Sonny & Cher Comedy Hour” for a few years in the early 70s. Bono was also involved in politics. He was the mayor of Palm Springs from 1988 to 1992 and was the Republican congressman for California’s 44th district from 1995 until his death in 1998.

This actor and comedian was born in Detroit in 1942. He passed away in 2019. You know him from his roles in “Friday,” “Next Friday,” “Little Nicky,” “The Wayans Bros.” and “Amen,” among many other TV shows and movies.

This actor and comedian was born in Royal Oak in 1958. He graduated from Groves High School where he met fellow famous Michigander, Sam Raimi. Campbell attended Western Michigan University for a short time before continuing to pursue acting. You know him from the “Evil Dead” series of movies which includes “Army of Darkness.” You also know him from “Xena: Warrior Princess,” “Brisco County Jr.,” “Burn Notice,” “Spider-Man” and starring as Elvis in “Bubba Ho-Tep.”

Of course, there are many other celebrities who are from Michigan that you may or may not know about. This is just 30 of some of the stars who were born in the Great Lakes State.

The most famous person from each of Michigan’s 83 counties

Podcast 244: Scott Stewart of the ILPA

Podcast 244: Scott Stewart of the ILPA